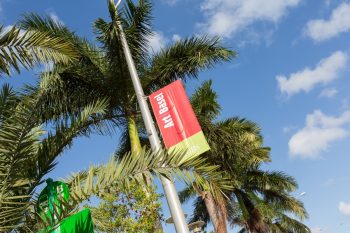 Art Basel stages the world’s premier art shows for Modern and contemporary works, sited in Basel, Miami Beach and Hong Kong. Defined by its host city and region, each show is unique, which is reflected in its participating galleries, artworks presented, and the content of parallel programming produced in collaboration with local institutions for each edition. In addition to ambitious stands featuring leading galleries from around the globe, each show’s singular exhibition sectors spotlight the latest developments in the visual arts, offering visitors new ideas and new inspiration.

Exhibitors will present works of art â€“ from historically significant projects and film, to painting, photography and largescale sculpture â€“ by Modern and contemporary artists. With a reapplication rate of 98% for the Galleries sector and in addition to a strong selection of returning exhibitors, the show features 21 galleries who are completely new to the Miami Beach edition, including 12 first-time entrants to the Galleries sector. The fair, whose Lead Partner is UBS, takes place at the Miami Beach Convention Center from December 1 â€“ 4, 2016.

Attracting leading collectors, curators, museum directors and critics from across the globe, Art Basel in Miami Beach is the premier art show of the Americas, with half of the galleries having exhibition spaces in the region. The geographically diverse list of participants spans 29 countries around the world, including Argentina, Austria, Belgium, Brazil, Canada, China, Colombia, Cuba, Denmark, France, Germany, Greece, Ireland, India, Italy, Japan, Mexico, Norway, Peru, Poland, Portugal, Singapore, South Africa, South Korea, Spain, Sweden, Switzerland, the United Kingdom and the United States.
2016 marks the fifteenth edition of the Miami Beach show, which has expanded over the years to include dedicated sections for film, outdoor sculpture, works in edition and curated shows of historical significance. The show has always offered both exploration â€“ with new works created by emerging artists â€“ and a continuity of a high quality international roster. Over 85 galleries exhibiting this year also took part in the very first edition in Miami Beach in 2002.

The 16 curated solo booths in Positions provide focused platforms for individual artists to present a major project. AdriÃ  JuliÃ  (b. 1974) will transform Dan Gunnâ€™s booth into a multimedia installation, which includes a mural based on Picasso’s â€˜Guernicaâ€™. For Manuel Burgenerâ€™s (b. 1978) first exhibition in the United States, Galerie Maria Bernheim will create an installation through the interplay of light between sculptures and photograms. Callicoon Fine Arts will feature tapestries and enamel paintings by Ulrike MÃ¼ller (b. 1971), while High Art will exhibit a series of ‘Trans-Habitats’ â€“ invented microcosms â€“ by Max Hooper Schneider (b. 1982). Through text, video and an architectural intervention, Beto Shwafaty (b. 1977) will address social and economic issues from Brazilâ€™s recent political history at Prometeogallery di Ida Pisani. At RaebervonStenglin, an interactive installation by Dane Mitchell (b. 1976) will disperse an artificial scent that is typically used by hunters as olfactory camouflage. JTTâ€™s installation of paintings by Becky Kolsrud (b. 1984) will reflect both her devotion to the female form as well as her infidelity to style, while at Off Vendome, Jeanette Mundtâ€™s (b. 1982) suggestive female figures from historical paintings are set directly within the space in a performative staging. Melanie Gilliganâ€™s (b. 1979) Tvsculptures at Galerie Max Mayer will be populated with abstract animations that comment upon systems of commerce. At Thomas Erben Gallery, Mike Cloudâ€™s (b. 1974) heavily layered collages will recycle product imagery and scenes of consumer culture. Maggie Leeâ€™s (b. 1987) immersive installation will recreate a teenage girlâ€™s bedroom complete with embedded video works and handmade ephemera, while Gao Ludiâ€™s (b. 1990) installation at White Space Beijing will appropriate symbols from Aliceâ€™s Adventures in Wonderland to explore the relationship between virtual and real worlds. At Galeria Marilia Razuk, Ana Luiza Dias Batista (b. 1978) will distort everyday objects â€“ keys, a doormat, and games â€“ in a playful expression of futility. Sector highlights will also include an installation of decorative, figurative and functional terracotta works by Shelly Nadashi (b. 1981) at Christian Andersen; a series of new sculptures and paintings exploring characteristics of human behavior by Melike Kara (b. 1985) at Peres Projects; and wall-based works and a floor installation by Amy Yao (b. 1977) at Various Small Fires. For the full gallery list, please visit artbasel.com/miami-beach/positions.

Nova, the sector dedicated to younger galleries showing new work by up to three artists, will this year feature 35 exhibitors. First time exhibitors will include Edouard Malingue Gallery, with a film by Wong Ping (b. 1984); House of Gaga, with paintings by Josef Strau (b. 1957) and Vivian Suter (b. 1949); and Nanzuka, who will present a large-scale mixed media canvas by Keiichi Tanaami (b. 1936), drawings by Hiroki Tsukuda (b. 1978) and a video by Oliver Payne (b. 1977). Also at the fair for the first time, Leo Xu Projects will present an installation of works by aaajiao (b. 1984), Cui Jie (b. 1984) and Liu Shiyuan (b. 1985), exploring the urban model and dystopian myth of Shanghai. Clearing will bring together Harold Ancart (b. 1980) and Korakrit Arunanondchai (b. 1986), who have drawn upon their close relationship as real-life studio neighbors to collaborate on an installation made specifically for the show.

The sector will also include a disquieting installation of new works that use animal furs, chicken skin and synthetic flora to explore anxieties resulting from radical biotech by Anicka Yi (b. 1971) at 47 Canal; Rita Ponce de LeÃ³n (b. 1982) and Ishmael Randall Weeks (b. 1976) at Ignacio Liprandi Arte ContemporÃ¡neo; Rey Akdogan (b. 1974) and Elaine Cameron-Weir (b. 1985) at Hannah Hoffman Gallery; Xavier Antin (b. 1981) and Renaud Jerez (b. 1982) at Galerie CrÃ¨vecoeur; and Matthias Bitzer (b. 1975) with Armin Boehm (b. 1972) at Francesca Minini. Nicole Wermers (b. 1971) and Margo Wolowiec (b. 1985) will explore the social and psychological meanings of everyday forms at Jessica Silverman Gallery. Wojciech BÄ…kowski (b. 1979), Christine Rebet (b. 1971) and Julia Rommel (b. 1980) will consider narrative and time-based practices through drawing, painting and animated film at Bureau. Solo presentations will include a series of hanging hand-blown glass balls by Kaspar MÃ¼ller (b. 1983) at SociÃ©tÃ©; salvaged sculptures and a socio-politically charged video by Kostis Velonis (b. 1968) at Kalfayan Galleries; conceptual works made of textile, plexiglass, wood and steel by Mika Tajima (b. 1975) at 11R; a 360 degree projected video environment by Taro Izumi (b. 1976) at Take Ninagawa; and sculpture comprised of freshly cut hedges by Chosil Kil (b. 1975) at One and J. Gallery. Joan Jonas (b. 1936) will pair several freestanding Murano mirrors with a video piece in her solo booth at Galleria Raffaella Cortese. Also of note will be solo exhibitions of Wanda Pimentel (b. 1943) at Anita Schwartz Galeria de Arte and Michael Dean (b. 1977) at Supportico Lopez. Simone Subal Gallery will present a large-scale collaborative environment and video by Anna K.E. (b. 1986) and Florian Meisenberg (b.1980), while Ghebaly Gallery will exhibit a site-specific collaboration between Kelly Akashi (b. 1983) and Patrick Jackson (b. 1978), exploring the use of architectural space and a visceral relationship to the body.

Galleries with strong artistic pairings will include Galerie Micky Schubert, showing sculptures by Benedicte Gyldenstierne Sehested (b. 1977) and paintings by Mark van Yetter (b. 1978); Silvia Cintra + Box 4, with psychologically laden textile pieces by Cinthia Marcelle (b. 1974) and Laercio Redondo (b. 1967); Maisterravalbuena, with Maria Loboda (b. 1979) and CristiÃ¡n Silva (b. 1969); motherâ€™s tankstation, with Nina Canell (b.
1979) and Sebastian Lloyd Rees (b. 1986); and Revolver GalerÃ­a, where JosÃ© Carlos Martinat (b. 1974) and Andrea Galvani (b. 1973) both explore the distance between the real and the virtual through glass. Lawrence Abu Hamdan (b. 1985) and Oscar MuÃ±oz (b.
1951) both investigate the use of language in spy systems at mor charpentier, while artists Aleksandra DomanoviÄ‡ (b. 1981) and Oliver Laric (b. 1981) will consider methods of production and reproduction at Tanya Leighton. Freedman Fitzpatrick will explore shared tendencies across three generations of German artists: Amelie von Wulffen (b.1966), Lucie Stahl (b. 1977) and Mathis Altmann (b. 1987). Never-before-seen paintings by the enigmatic Vern Blosum (b. unknown), will question the conceptual production of authorship at Essex Street, along with new sculptures by Chadwick Rantanen (b. 1981). David Castillo Gallery will present works by Sanford Biggers (b. 1970) and Xaviera Simmons (b. 1974) that enunciate personal integrities within the context of larger cultural, historical, art historical and narrative constructs. Galeria Leme features a presentation of Vivian Caccuri (b. 1986) and Jaime Lauriano (b. 1985) exploring dynamics between Brazil and the African continent, centered around the MalÃª Revolt, an 1835 insurgency of enslaved African Muslims in Brazil. At TravesÃ­a Cuatro, both Sara Ramo (b. 1975) and Mateo LÃ³pez (b. 1978) will explore the language of objects, while at Instituto de visiÃ³n, Marlon de Azambuja (b. 1978), Alberto Baraya (b. 1968) and SebastiÃ¡n Fierro (b. 1988)
will challenge representations of Latin America as an exotic stereotype. For the full gallery list, please visit artbasel.com/miami-beach/nova.

In addition to showing premier artworks across five gallery sectors, many exhibitors will present works in Art Basel’s project-based sectors: Kabinett, Public and Film, currently being selected. Over the coming months, further details about these special sectors as well as about the Conversations and Salon program of panels and talks will be released.

The Miami Beach Convention Center, Art Baselâ€™s home since the Miami Beach edition launched in 2001, is currently undergoing renovation, to be completed in 2018. Carefully planned by city officials around the Art Basel shows, the construction will result in improved exhibition halls and state of the art facilities for exhibitors and visitors. During the renovation, Art Basel will continue to take place throughout the same four exhibition halls as in past years. For more information on the project, please visit mbccfuture.com.

Art Basel has always had a close relationship with regional arts organizations. As such, South Floridaâ€™s leading museums time their strongest exhibitions of the year to coincide with Art Basel. In December, the PÃ©rez Art Museum Miami (PAMM) will present â€˜Julio Le Parc: Form into Actionâ€™, an exploration of kinetic work by one of the leading Argentinian artist; â€˜Susan Hiller: Lost and Foundâ€™, an immersive video installation; â€˜Sarah Oppenheimer: S-281913â€™, a series of architectural interventions; a solo show of paintings by David Reed; and work by Ulla von Brandenberg in the museumâ€™s project gallery. The Institute of Contemporary Art, Miami (ICA Miami) will present â€˜Thomas Bayrle’, while NSU Art Museum Fort Lauderdale will show â€˜Belief + Doubt: Selections from the Francie Bishop Good and David Horvitz Collectionâ€™, â€˜Francesco Clemente: Dormivegliaâ€™, â€˜Regeneration Series: Anselm Kiefer from the Hall Collectionâ€™ and â€˜Samson Kambalu: Nyau Cinemaâ€™.

Other highlights include â€˜Modern Dutch Designâ€™, â€˜The Pursuit of Abstractionâ€™, The Politics of -Ismsâ€™ and â€˜Visionary Metropolis: Tony Garnierâ€™s Une CitÃ© Industrielleâ€™ at the WolfsonianFIU; a project by Mark Dion at the Kampong National Tropical Botanical Garden in partnership with Florida International University; â€˜Question Bridge: Black Malesâ€™ and â€˜Rudin Prize for Emerging Photographersâ€™ at the Norton Museum of Art; â€˜When We Were Youngâ€™ and â€˜JosÃ© ParlÃ¡: Roots’ at YoungArts; and ‘The Other Dimension: Contemporary art practice as the existence of higher dimensions’ by Antuan Rodriguez at the Museum of Contemporary Art (MOCA). Recently rebranded as The Bass, Miami Beachâ€™s contemporary art museum will present off-site activations throughout the week as the museum looks ahead to its re-opening in Spring 2017.

Design Miami is the global forum for design. Each fair brings together the most influential collectors, gallerists, designers, curators and critics from around the world in celebration of design culture and commerce. Occurring alongside the Art Basel fairs in Miami Beach, and Basel, Design Miami has become the premier venue for collecting, exhibiting, discussing and creating collectible design. In its 12th edition, Design Miami will take place from November 30 â€“ December 4 at Meridian Avenue and 19th Street in Miami Beach opposite the Miami Beach Convention Center. For more information, please visit designmiami.com.