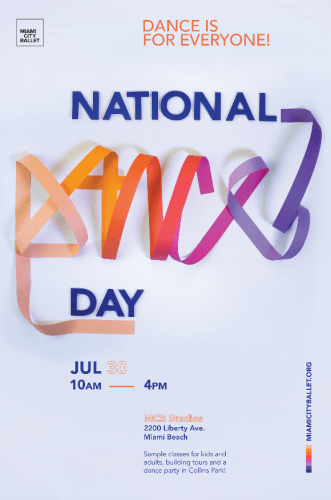 Miami City Ballet is celebrating National Dance Day on Saturday, July 30, with a dance party in Collins Park followed by an Open House across the street at MCB Studios to showcase MCB School programs.

Free and open to the public, the event is part of an annual celebration launched in 2010 by the Dizzy Feet Foundation and made popular by the hit TV show, â€œSo You Think You Can Dance.â€ The tradition has since been carried out in Los Angeles and Washington D.C., so MCB is excited to lead the charge in inviting the community to its first-ever celebration in Miami Beach. The event will raise support for MCB and Dizzy Feetâ€™s shared mission to encourage Americans to embrace dance as a fun and positive way to maintain good health and fight obesity.

So bring your dancing shoes for an outdoor dance party starting at 10 am. Participants will be guided through a dance routine created especially for National Dance Day. The dance party will culminate with everyone performing together in a flash mob.