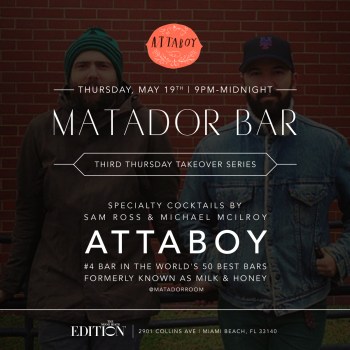 The expert barmen at Matador Bar will partner up with the boys from Attaboy, Sam Ross and Michael Mcilroy, to concoct some libations that are sure to cure what ails you and bring out the whoâ€™s who of Miamiâ€™s cocktail scene.

After two successful bar takeovers with Londonâ€™s Punch Room and New Yorkâ€™s Employees Only, The Miami Beach EDITIONâ€™s Matador Bar joins forces with Attaboy for their Third Thursday Takeover series. Based in New York Cityâ€™s Lower East Side, Attaboy, formerly know as Milk & Honey, consists of two bartenders, Michael Mcilroy and Sam Ross, who is credited with creating the classic cocktail, The Penicillin. Their bar has been ranked #4 in the Worldâ€™s 50 Best Bars in only their second year of operation. Miami will get a chance to sip on their cocktails for $12 each, featuring Remember The Alimony, Late Noche Reviver, and Cameronâ€™s Kick.