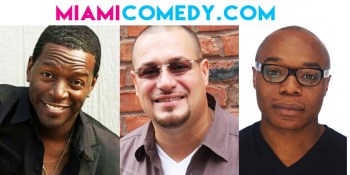 Wednesday Night Live is where some of the rarest comedians stop by Miami for one night only.

Comedian Kyle Grooms (Comedy Central, Vh1, Last Comic Standing) hosts an all star line up that will be the most exclusive LOL experience in Miami on a Wednesday Night.

Dean Edwards: With a dynamic energy and an almost tangible onstage presence, Dean Edwards remains one of the comedy worlds most in demand performers across the globe. Armed with a razor sharp wit, an arsenal of characters and spot on impressions, itâ€™s no wonder that heâ€™s become such a favorite, garnering media attention as well as a legion of fans. Credits include: SNL, Comedy Central and Def Comedy Jam

Edgar Rivera: Edgar Rivera aKa “Tangana” is a NyC Latino Comedian who has conquered Stand-Up Comedy in both English & Spanish with his unique story telling style. He started his public career after being inspired by the “NuyoRican Rule” A Latino Sketch Comedy Troupe based out of the Legendary NuyoRican Poets Cafe! Since then, the stage has been where Edgar belongs. Look for him on Univision, Telemundo, MundoFox, and Colleges across the Country.

The Flamingo Theater Bar is a plush, spacious and intimate. Great for date night and a nominal priced drink to enjoy live comedy. A hidden gem in Brickell Bay located inside the luxurious Four Ambassadors Hotel