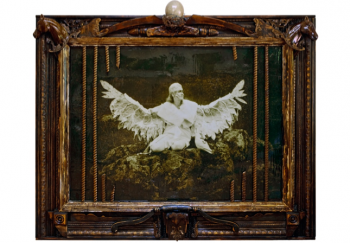 Myths, Words and Fire, an art installation by Laura Kimpton, will be on view at the SLS South Beach Hotel. The installation will transform the entire ground floor of the hotel from the street to the pool area with sculpture, video and paintings. Sponsored by art collectors Marc Bell and Marc Leder, Myths, Words and Fire is Kimptonâ€™s first Miami Beach project. In addition to the installation, Kimpton will launch her â€œSheâ€™s Got Wingsâ€ apparel line at a pop-store in the hotel during art fair week. Bell and Leder will host a VIP party at the SLS on Saturday evening, December 5th in honor of Kimpton.

Myths, Words and Fire will offer viewers the opportunity to observe and interact with Kimptonâ€™s world of playful irreverence. Her use of images, words, objects and junk is a way of expressing her conceptual viewpoint that â€œnothing is sacred.â€

In the spirit of radical self-expression, Kimptonâ€™s installation will feature several of her monumental, Burning Man word sculptures including LOVE, #, M, and OK. Other elements in the SLS installation include:
A three-story painted wrap on the front faÃ§ade of the building;
A painted art truck filled with televisions displaying Kimptonâ€™s Burning Man EGO Installation Burn and other videos;
An 18-foot flaming, propane, Celtic Forest tree by the hotel entrance;
An EGO burning video in the hotel lobby near the elevators;
In the pool area, 10-15 easels with 2-D mixed media pieces including Self Portrait, White Bird;
On the beach, a moat with flaming steel books and an 8-foot centaur and an 8-foot mermaid;
In the bar area by the pool, 200 small pillows made from Kimptonâ€™s oil paintings and throw blankets for the couches.

About Laura Kimpton
Laura Kimpton is a California-based, American contemporary artist whose work consists of painting, mixed-media installations, and sculpture. Her creativity stems from a desire to question traditional views on social interaction, therefore invoking through her art a reaction from her viewers that ultimately completes her projects. She is continually exploring new mediums in her search for revelatory communication. Her raw and original work uses photography, found objects, televisions, paint, and resin – fusing objects of history to convey a very personal message.

Kimpton’s foundation for this approach is a Bachelor of Fine Arts from The San Francisco Art Institute and a Master of Arts in Counseling Psychology from the University of San Francisco. Her works have been exhibited throughout the United States, including solo exhibitions in New York, Los Angeles, and San Francisco. Her accolades include that of being a six-time Honorarium Grant Recipient at Burning Man, as well as the creator of monumental works such as â€œCeltic Forestâ€. Laura Kimpton is best known for her Monumental Word Series. Her Monumental Word Sculptures have been purchased as permanent installations in Santa Rosa, CA, Arlington, TX, Reno, NV, Hong Kong, China, and soon in Miami, FL.