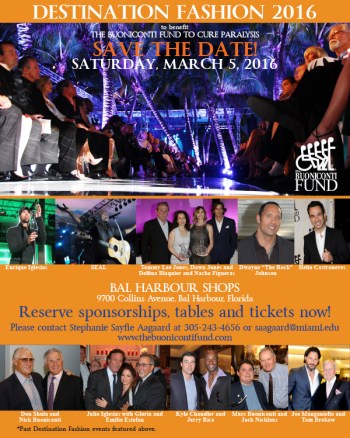 NFL Hall of Fame linebacker Nick Buoniconti and his son, Marc from The Buoniconti Fund to Cure Paralysis, the fundraising arm of The Miami Project to Cure Paralysis, along with our Event Chairs, will again host the much-anticipated Destination Fashion 2016 which will feature an interactive affair with a Live Celebrity Concert, Designer Fashion Show and Celebrity Presenters Honoring the 2016 Women of Substance & Style at Bal Harbour Shops.

To celebrate Bal Harbour Shopsâ€™ 50th anniversary and The Miami Projectâ€™s 30th anniversary, the nationâ€™s top shopping destination and the worldâ€™s most comprehensive spinal cord injury research center have teamed up again to produce Destination Fashion 2016. This incredibly unique evening has featured concerts by Grammy Award winners Enrique Iglesias, SEAL, Donna Summer and Kool & The Gang, fashion shows by Emilio Pucci, Michael Kors, and Ralph Lauren, has been chaired by Oscar Award Winning Actor Tommy Lee Jones and polo sensation Ignacio â€œNachoâ€ Figueras and emceed by NBC News icon Tom Brokaw. One major highlight of the event is the opportunity to bid on the magnificent â€œToo Good to Keep Silent Auctionâ€ items donated by the Bal Harbour Shops. Partygoers will also witness the unveiling of the 2016 Women of Substance and Style honorees when they walk down the runway with their Celebrity Presenters. This event remains the only time in Bal Harbour Shopsâ€™ history when its doors are closed to host this truly one-of-a-kind, prominent, private celebrity-styled affair.