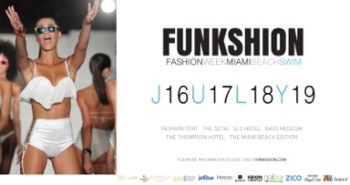 Funkshion Swim Week presents four days filled with swim fashion. Shows by designers such as Mara Hoffman, Liliana Montoya, Luli Fama, and more will be taking place between July 16 and July 19 at various locations such as The Setia Hotel and SLS South Beach in addition to the Funkshion tent on Collins Avenue between 21st and 22nd Streets.