After an unplanned tour of Little Haiti in Miami last night, my wife and I gave in to technology and plugged in the address of The Moore Building in Miami’s Design District into the phone. After all, we didn’t want to be late to the second annual Eats & Beats culinary and musical event taking place from 7:30 until midnight!

Whew! Just made it on time, and someone was nice enough to leave a parking space right in front of the building for us. We met the organizers on the way in and then got started tasting some great dishes, sampling some terrific spirits and cocktails, and being entertained with some great music and ambiance.

The pink lights flashing on the very unique architecture of The Moore Building made me feel like I was back at a club in Paris I visited a few times in the 90’s. Eats & Beats took place on all 4 floors, which each have a 360 degree balcony overlooking the center of the building. Pretty cool! 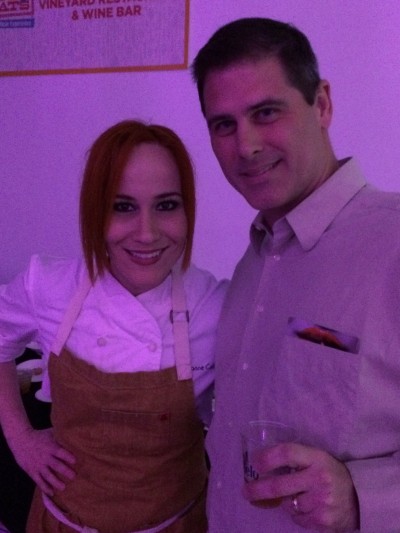 We met some very nice people, both vendors and other guests alike. If I were forced to pick some favorites, I’d have to choose Chef Adrianne Calvo (who also made a spectacular dessert at the Five Cubed event a few days ago), the food from Segundo Muelle Peruvian Restaurant, Red The Steakhouse, Brother Jimmy’s, and Havana 1957. Oh, and the cupcakes from Ana Paz Cakes and Slice of Art!

And on the spirits side of things, I loved the Zafra rum, both on the rocks and as a cocktail. Not to be outdone were the terrific mojitos that the folks from Nikki Beach were making. Not only did both of those vendors make a great tasting drink, but they went all out with their presentation and overall experience. 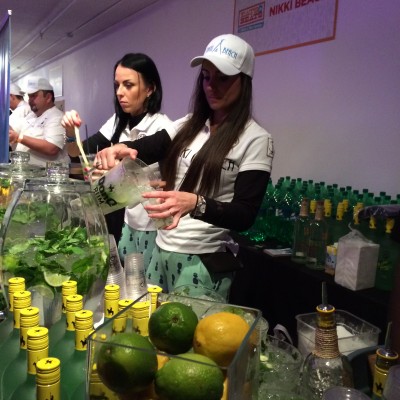 IT Espresso Lounge also made a very nice prosecco based drink, quite refreshing. And as the “beer guy,” I have to give a shout out to the only beer vendor there–Modelo! I personally would have like to have seen a few more strong brands, especially considering the emergence of craft beer on the Miami scene. But hey, that’s probably just me.

All the vendors were friendly, knowledgeable, and wanted to share their products with you. And to the army of people that made the event happen, congratulations! Can’t wait for Eats & Beats 2016!