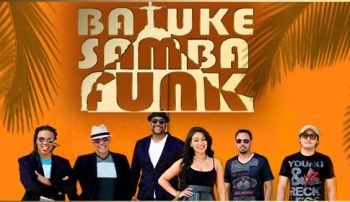 Come celebrate Carnaval in Rio at Pinecrest Gardens, with Batuke Samba Funk, Miami’s finest Brazilian band, presented by KCC Productions. The roots of Carnaval trace back to the ancient Romans and Greeks who celebrated the rites of spring. Across Europe, including France, Spain and Portugal, people annually gave thanks by throwing parties, wearing masks and dancing in the streets. Such traditions were carried over to the New World. Carnival has come a long way since it was brought to Rio, having become one of the biggest events in the World. Tonight it comes to Pinecrest!

If you like Funk, Afro Beat, and Brazilian music, this is the right band for you. Batuke is a mix of Brazilian rhythms like Samba and Afro-Brazilian, with the raw 70â€™s Funk, creating a groovy atmosphere wherever the seven-piece band plays. Batuke Samba Funk was created by Brazilian bass player, composer, and producer Diogo Brown in 2009. Diogo studied at the Conservatory of Rio de Janeiro, and is one of the most accomplished and recognized Brazilian musicians in South Florida. He has played alongside artists such as Ricky Martin, Chris Delano, Nouvele Vague, Caludia Leitte, Beatriz Luengo, Don Omar, and Youtel (Orixas), among others. The core of the band consists of five Brazilian musicians and adds two American musicians on the horns. You can expect a hand-clapping, foot-stomping good time worthy of the celebration. The program will also feature a samba dancer in full Carnaval costume to brighten the proceedings still further!

The show is part of the South Motors Jazz Series, and will be in Pinecrest’s Banyan Bowl, 11000 SW 57th Ave. (Red Road), starting at 8 PM. Tickets are $25 and $30, available at pinecrestgardens.org.