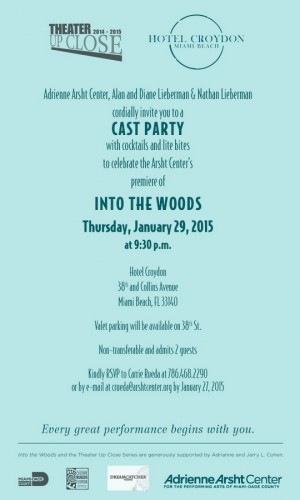 Come join a great gathering to celebrate Titus Burgess playing the role of the Witch in the Arsht Centerâ€™s stage production of Into The Woods! The Arsht was mentioned in media for the beautiful diversity in its cast of Into The Woods as hype continued around the movieâ€™s lack thereof.

Come to meet this talented actor and enjoy complimentary cocktails and lite bites at a gorgeous location on South Beach.

INTO THE WOODS features an all-star cast comprised of stellar local talent and New York-based actors including Broadwayâ€™s Tituss Burgess (Jersey Boys, The Little Mermaid, Guys and Dolls and TVâ€™s â€œ30 Rockâ€) and Arielle Jacobs (In The Heights). INTO THE WOODS is the inaugural production by DreamCatcher Theatre, a new South Florida-based company led by Miami native brother-sister team Natalie and J.J. Caruncho. Meet them at this exclusive event to celebrate Theater Up Close.

Donâ€™t have tickets to see the Thursday, Jan. 29th performance of Into The Woods? Click here.