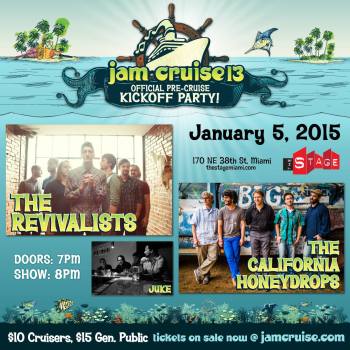 The septet has been playing nonstop since 2007, crafting a genre-hopping sound that rounds out traditional rock instrumentation with horns and pedal steel guitar and mixes the divergent backgrounds of its individual members with the humid, funky undercurrents of the bandâ€™s New Orleans home. The result is like English spoken with an exotic accent: familiar, yet difficult to pin down.

The California Honeydrops donâ€™t just play musicâ€”they throw parties. Drawing on diverse musical influences from Bay Area R&B, funk, Southern soul, Delta blues, and New Orleans second-line, the Honeydrops bring vibrant energy and infectious dance-party vibes to their live shows. Theyâ€™ve taken the party all over the world: on their nine European tours, to featured slots at such premiere festivals as Monterey Jazz, High Sierra, and Outside Lands, and performances in 2013 supporting B.B. King, Dr. John, Buddy Guy, and Allen Toussaint. Whether in those high-profile performances or in more intimate venues where the band itself can leave the stage and get down on the dance floor, the California Honeydropsâ€™ shared vision and purpose remain: to make the audience dance and sing.

Hailing from Miami, JUke is a new breed of Post-blues and the brainchild of singer/songwriter/harmonica whiz, Eric Garcia, who was dissatisfied with most dated, non-threatening traditional blues. Eric felt the need to bring the angst and power back into the type of music that seemed to lose some of it’s relevance and impact.

Teaming up with guitar phenom and singer, Evan Lamb, was the catapult that made JUke go and realize Eric’s vision.

The addition of powerhouse drummer, Brian Lange, and the endless grooves from bassist, Taylor Byrd, have completed the unique hybrid that has become JUke.