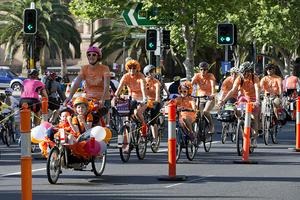 Join us at HistoryMiami on Monday, January 12th 9AM – 12PM for the opening event of ThinkBike 2015, a four-day celebration and study of how biking can make Miami more livable and sustainable.

Brought to you by the Consulate General of the Kingdom of the Netherlands, in cooperation with Miami-Dade County, Miami-Dade Metropolitan Planning Organization, Friends of the Underline, the Dutch Cycling Embassy, Bike305 and The Parks Foundation of Miami-Dade, ThinkBike 2015 features several presentations and workshops at HistoryMiami and the Downtown Miami-Dade County Public Library.

Led by an experienced team of Dutch urban planning and mobility experts, ThinkBike 2015 focuses on The Underline, the transformative 10-mile linear park and urban trail below Metrorail from the Miami River to Dadeland South, and how it can enhance connectivity, mobility, and biking safety for hundreds of thousands of residents and visitors.

The opening session on Monday, January 12th, kicks off with a public presentation of Dutch best practices for bike infrastructure, planning, and implementation. Experts will share how the Netherlands was transformed into the worldâ€™s most bike-friendly country, where the bike is used as an alternative to driving a car. The kickoff concludes with a virtual bike ride along the M-Path, the existing bike path below Metrorail.

Sign up now for the closing session on Thursday, January 15th, from 1-3:30 PM at HistoryMiami, which will feature the findings and recommendations for the Underline’s implementation by renowned mobility and infrastructure experts (RSVP here). After the closing session, ThinkBike 2015 will conclude with the presentation of a VanMoof bicycle to the winner of the LoveBike contest followed by a party on the HistoryMiami Plaza (RSVP here).

LoveBike: Enter to win a VanMoof bike courtesy of The Netherlands Consulate in Miami. Visit www.theunderline.org/lovebike, tell us what you like and don’t like about biking in Miami. Entries accepted through January 12, 2015. We’ll announce the winner at the ThinkBike 2015 closing event: Party on the Plaza, HistoryMiami on January 15th 3:30-5 PM.