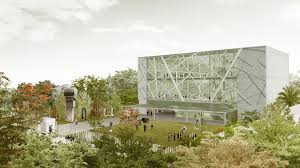 Envisioning a Museum, the Skyâ€™s the Limit

In Miami, the Bramans Plan the Institute of Contemporary Art

MIAMI â€” Norman Braman, the auto dealership magnate, has just uttered the words every contractor dreams of hearing: â€œWhatever the cost is, we will be building it, period.â€

Sitting with his wife, Irma, on the patio of their Indian Creek Island home, off Miami Beach, he has been outlining their plans to single-handedly fund the design and construction of South Floridaâ€™s newest major museum, the Institute of Contemporary Art, Miami. It could be a cultural game changer in a city crowded with four significant private museums, two more on the way and three public ones all focused on contemporary art.

With Mrs. Braman as co-chairwoman of its board, the plan is to build the museum on a lot in the Miami Design District donated by the real estate developer and fellow art collector Craig Robins, occupying 37,500 square feet across three floors. It will also have an adjoining 15,000-square-foot sculpture garden created by the Bramansâ€™ purchase (and imminent razing) of three neighboring homes. Its opening is timed for the Art Basel Miami Beach fair in December 2016, with the promise of significant art loans from the Braman collection. Just donâ€™t ask to see an actual budget.

â€œWe havenâ€™t even priced out the fire extinguisher system yet, because it doesnâ€™t use water so it wonâ€™t damage the art,â€ Mrs. Braman said. â€œItâ€™s still a bit of flying blind.â€

This might be cause for taxpayer alarm, but Mr. Braman, a fixture on Forbesâ€™s â€œ400 Wealthiest Americansâ€ list â€” which estimates his current net worth at nearly $2 billion from his auto dealerships, his former ownership of the Philadelphia Eagles, and one of the most impressive art collections in the country â€” insisted that â€œnot one cent of taxpayer dollars are going into the construction, or the acquisition of properties for the sculpture garden, or anything.â€

With estimated annual operating expenses of $5 million, the Bramans say they already have commitments from other private backers to ensure the museumâ€™s first decade of operation. Mr. Braman waves off concerns about funding an endowment. â€œIf an institution has not made it after 10 years, it shouldnâ€™t be around anymore,â€ he said.

Donâ€™t even ask about naming rights. â€œItâ€™s the I.C.A. Miami, itâ€™s not the Braman I.C.A. or anything like that,â€ Mr. Braman said, in a not-so-subtle swipe at the PÃ©rez Art Museum Miami, a public-private partnership which led to the renaming of the cityâ€™s Miami Art Museum in honor of contributions from the developer Jorge M. PÃ©rez, and which just celebrated its first year in its new waterfront home.

The Bramansâ€™ insistence on footing the bill contrasts starkly with the shaky fiscal health of several local museums. While the PÃ©rezâ€™s attendance and museum memberships have exceeded initial projections, according to Michael Spring, director of Miami-Dade Countyâ€™s Department of Cultural Affairs â€” who called the museumâ€™s first year â€œa rip-roaring successâ€ â€” its endowment stands at $14 million, well below its announced target of $70 million. The museum operates with a reduced staff and a permanent collection often seen as lackluster.

This fall, the PÃ©rez museum requested additional county funds to raise its annual subsidy to $4 million from its current $2.5 million, a request that fell on deaf ears amid a county budget crunch that saw both public librarians and the police facing layoffs. Critics noted the $100 million in construction money already provided by the county, as well as the marquee site donated by the City of Miami. Wasnâ€™t that enough?

â€œThe vast majority of cultural institutions in this community are supported through a blend of public and private funds,â€ countered Thom Collins, the museumâ€™s director. â€œThis is because they offer a broad public benefit, and people understand that.â€

To be sure, money continues to pour into Miamiâ€™s real-estate-focused economy, as do prominent art world figures, including the New York Ã¼ber-dealer Larry Gagosian and the Russian art patron Maria Baibakova, who both have homes here.

Yet while many arrivals are quick to pose for Art Basel photographers, some museum trustees say these newcomers turn shy when it comes to writing checks to public museums. â€œThe wealth in Miami, by and large, is used more for self-aggrandizement than civic support,â€ observed Lang Baumgarten, a Miami Beach developer and former Miami Art Museum trustee who said that he donated $400,000 and artwork before its renaming. â€œI wish the real money would step up to the plate.â€

A lack of financial support led to the creation of the Institute of Contemporary Art, whose board previously managed the Museum of Contemporary Art, owned by the City of North Miami. After voters in the largely Haitian-American community rejected a $15 million bond issue to expand the Museum of Contemporary Art in 2012, its director, Bonnie Clearwater, left to head the Nova Southeastern University Museum of Art in Fort Lauderdale. The fight over naming her successor mushroomed into bitter turmoil between museum board members and City Hall. A legal settlement last month ended with an entirely new city-appointed board at the museum.

â€œThe team thatâ€™s reconstituted itself at MOCA seems to be going in a good direction,â€ said Mr. Robins, who is providing the Institute with temporary rent-free exhibition space while doing double duty as a PÃ©rez trustee. â€œI hope the I.C.A. will motivate the people behind PAMM to do even better,â€ he said, adding that he hoped to see more donations to support world-class art purchases.

Mr. Spring denied any disappointment with the pace of fund-raising. â€œTheyâ€™re hitting their marks,â€ he said.

Still, the PÃ©rez may be in danger of being overshadowed: Art lovers craving an encounter with contemporary masterworks mostly absent from local museums â€” where even 1980 often feels like ancient history â€” may find the Institute more to their liking. The PÃ©rez recently trumpeted a donation of a Jasper Johns print. The Bramans own his seminal 1962 painting â€œDiver,â€ as well as blue-chip works by de Kooning, Rothko, Warhol and what is called the finest array of Calders still in private hands.

The Bramans said that they look forward to lending many of their works to the institute. â€œIf the curator and director of the museum want to have a show on the New York School of Artists, weâ€™d be very happy to cooperate,â€ Mr. Braman said, referring to a hallowed era of Abstract Expressionists theyâ€™ve avidly collected. He also dangled the possibility of donating some paintings â€œin the future.â€

Now 82, Mr. Braman recalled that he and his wife â€œsaid to ourselves: â€˜Whatâ€™s success all about? Whatâ€™s philanthropy all about? Letâ€™s think of our legacy, following in the footsteps of some great Americans like the Carnegies and the Mellons who used their wealth for quality purposes.’ â€

Mr. Collins was asked if the PÃ©rez had sought its own modern-day Mellon. Why not tap Ms. Baibakova, whose recent Art Basel party featured white truffles, which fetch roughly $200 an ounce? â€œIf you could make those introductions for me, it would certainly take a lot of pressure off,â€ he replied.