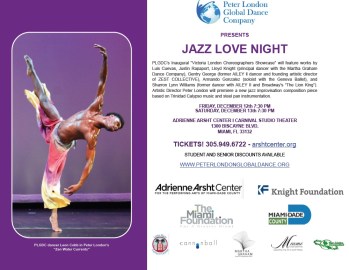 The Adrienne Arsht Center for the Performing Arts of Miami-Dade County and The Peter London Global Dance Company, Inc. (PLGDC) are proud to present Jazz Love Night in the Carnival Studio Theater on December 12-13, 2014 at 7:30 pm each night. Peter London serves as the founder and artistic director of Miamiâ€™s emerging multicultural dance troupe, who will produce the two-night engagement accompanied by a soundtrack of celebrated 20th Century jazz masters. The dance sampler features new works from six choreographers, including one from London himself, as part of the Companyâ€™s inaugural Victoria London Choreographers Showcase.

General admission tickets are $35.00, and discounted rush tickets are $20.00 for students and seniors with valid identification. Groups of 10 or more will receive a 15% discount. Tickets can be purchased from the Arsht Center box office by calling (305) 949-6722.