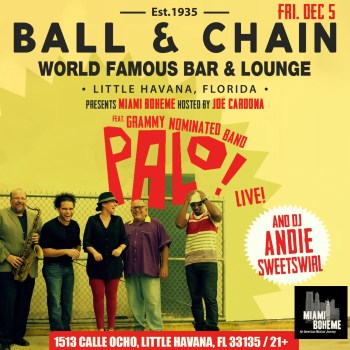 Miami Boheme nights, now scheduled every Friday is inspired by the documentary film written and directed by Joe Cardona. Joe, who will be hosting the event tomorrow is a documentary filmmaker and a writer for the Miami Herald. He coined the term ” miami boheme” to describe a genre of music he saw developing in Miami. Below, is a brief summary of the film:

Miami Boheme: An American Musical Journey is an hour-long PBS documentary about Miamiâ€™s original Latin-fusion bands and the cutting-edge scene surrounding them. The film takes viewers to clubs where the beats of bands such as Spam Allstars, Locos Por Juana, SuÃ©nalo, PALO!, Elastic Bond, and Afrobeta getthe room dancing. The film is a bilingual mash up of rhythms and cultures. It is a one-hour jam session like no other: a fusion of sights, sounds, and ideas that meld together to form the fabric of Americaâ€™s most dynamic city, Miami.

As part of the The Miami Boheme nights, Joe will host each night by engaging in dialogue with the performers, and by providing commentary to the audience. Joe will also be introducing new bands that have never been previously classified as “miami boheme” into the mix.