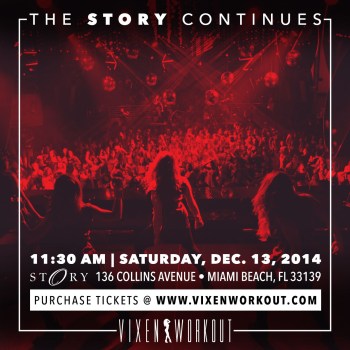 Janet Jones, the Creator of the Vixen Workout, the workout that has been dubbed The Workout Class That Makes You Feel Like BeyoncÃ©, The Workout That Makes Moves On Womenâ€™s Self Esteem and the Freshest Fitness Launch of 2014, is rounding up her troops to deploy the most epic Fitness Concert to date on 12.13.14 at Story Nightclub on South Beach. In celebration of the second anniversary of the hottest workout that has taken the nation by storm, Jones and her team will hit the stage with never-been-seen routines to accompany the Vixen Workout favorites.

From the customized videos (think BeyoncÃ© and Jay-Z On The Run) to concert lighting and remixes of the artists in heavy rotation on Jonesâ€™ playlists, The Vixen Workout will take over STORY and put on a workout that will blast calories and make women (no guys allowed) leave everything on the dance floor. Jones and her team of dancers will perform in front of and for the #vixenarmy, the thousands of women who make up the sisterhood that Vixen Workout has become, leading an hour-long+ sweat session for guests to follow along. There will be new material mixed with the current, but all women will be able to let inhibitions go and celebrate each other in the Ultimate Girls Night Out, during the day.

Friends donâ€™t let friends miss the most buzzed about fitness event of the year, so ladies should grab a friend, a sister, a co-worker, their mom and get dressed in their Vixen best and get ready to make history.

Doors open at 11:00 am in order for those attending to check their bags, primp, shop the latest must-have Vixen Workout gear, and claim their spots on the dance floor. The workout begins at 11:30 am.

Tickets to the Fitness Concert are available for $30 online at www.vixenworkout.com. Tickets at the door will be $40.