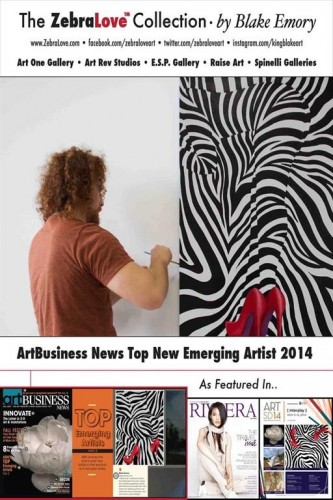 Zebra Love is the latest anthology by the New York artist, whose collective series of theoretical works is capturing the attention of not only the fine art world, but the countryâ€™s leading brand visionaries within the marketing community.

Emoryâ€™s Zebra Love series represents the artistâ€™s inspired discovery of what he refers to as â€œnatureâ€™s grand designâ€ that encapsulates an artistic expression of retro fashion with love, passion and â€œdivine geometryâ€ from the animal kingdom. Zebra Love portrays an underlying theme based on a fluid visual depiction of Zebra stripes that are carved to form the foundation of a multi-dimensional approach to acrylic on canvas. Using an individual female model and form as the muse for every piece of work, the curvaceous and nude silhouette of each chosen woman is juxtaposed against the Zebra design and blended within the center of the frame to convey a layered optical illusion at first glance. Emory describes his final touch as a â€œpassionate step in to the world of love needed to liberate us from the human construct,â€ illustrated by a retro-style red stiletto worn on one foot â€“ giving the black and white design its signature dash of vibrant color, fashionable overture and overtly sexual connotation. Each painting ranges from between 40×30 inches in size, up to 5ft by 8ft in height.

â€œI like to think of my work as representing the unity of mankind,â€ says Blake Emory. â€œThe Zebra is one of natureâ€™s grandest designs and I fell in love with this beautiful formation and found that its geometry gave me a new form of expression in Optic Modernism. The female figure represents the world of love and what I believe is a type of â€˜social silhouette.â€™ Iâ€™m very proud of my latest work and I look forward to sharing my vision and inspirations with everyone for the inaugural show at Art Basel.â€

Each painting from Emoryâ€™s 15-piece collection is entitled after the women whose voluntary participation is part of the creative process. â€œJosephineâ€ is Emoryâ€™s most beloved and original work of art, with â€œFloveâ€ cited by Emory as the most â€œsexualâ€ and â€œcontroversialâ€™ from his collection. Other example names of his artwork include â€œShauna,â€ â€œBilly Leighâ€ and â€œLevon.â€

The conceptual process Emory uses for his work is very unique to his particular artistic style. Initial drawings are made of the Zebra contours from original photography, which are then projected on to a wall. An undressed female model then stands in front of the wall, on to which the Zebra pattern is captured over the entire body, from which Emory extracts a silhouette on to his canvas using oil based acrylic. Emory paints the juxtaposition of the body against the wall projection with the model wearing the red stiletto â€“ resulting in a 3-D optical illusion.

Following the development of his own mural business at junior high school, Emory started discovering new techniques in fine art at the age of 17 years old. While living in Miami Beach by the time he was 19, Emory used Lincoln Road on South Beach to showcase his work. Marketing entrepreneur, Michael Alden, stumbled across Emoryâ€™s Zebra Love series in 2011 and purchased a number of paintings before quickly turning in to a major fan of his collection. On the first day of January 2014, Alden rediscovered Emoryâ€™s work after purchasing a portrait of Madonna that was donated by the artist to the Global Deeds foundation for underprivileged children in Beverly, Massachusetts. Alden befriended Emory after seeing the marketing and merchandising potential for the Zebra Love brand and a new business relationship was born.

â€œAs an avid art collector, I immediately took a fondness to Blakeâ€™s work,â€ says Michael Alden, President and CEO of Blue Vase Marketing, LLC and Zebra Love, LLC. â€œThe entire Zebra Love concept transcends the art world with a massive potential for other products that could incorporate this innovative and compelling design. The sensual nature of Blakeâ€™s artistic impression is both striking and very appealing to the eye. Blakeâ€™s creativity coupled with our marketing ingenuity has enabled us to develop the Zebra Love brand in to more than just an art form. We have some exciting plans for expanding Zebra Love in 2015 and Art Basel Miami Beach is an excellent forum for the industry to experience Blakeâ€™s work.â€

Alden and his marketing team at Blue Vase, in partnership with Emory, have translated the Zebra Love concept on to frosted glass and plan on releasing a limited edition premium vodka in March 2015, aptly named â€œEMORY VODKA.â€ Imported and bottled by the newly formed Zebra Love, LLC parent company, Emoryâ€™s Zebra Love design is embossed on to a signature artisan bottle, complete with Emoryâ€™s trademark red stiletto. Emory Vodka marks the first brand extension in the Zebra Love series and features Emoryâ€™s â€œShauna1â€ design for the inaugural product adaptation. A portion of proceeds from the sales of Emory Vodka will be donated to the ASPCA to help prevent cruelty to animals.

For the last four years, Emory has established his own â€˜Emory Galleryâ€™ currently open in New Yorkâ€™s Chelsea neighborhood, at which his Zebra Love collection is exhibited, along with his other original works of art. Emory helps spearhead The Brooklyn Artist Guild â€“ a donation based education program that identifies talented and emerging artists who join the group in an effort to highlight the Neo Renaissance movement through their multi-media work in the theatrical and visual arts.

A selection of original works from Blake Emoryâ€™s Zebra Love collection will be exhibited at Spectrum Miami, located in the cityâ€™s Midtown district, priced between $7,500 and $15,000.