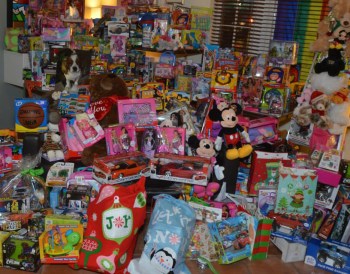 Santaâ€™s workshop will take over the LGBT Visitor Center in Miami Beach for the 5th Annual HoliGay Celebration and Toy Drive, Thursday, December 11, from 6 p.m. to 9 p.m. Wannabe Santas from the entire community are invited to bring an unwrapped toy as a contribution to the Miami Beach Police Departmentâ€™s Childrenâ€™s Holiday Relief Fund for distribution to children in need. The LGBT Visitor Center is located at 1130 Washington Avenue in Miami Beach.

â€œEach year, the HoliGay Toy Drive grows and grows like a snowball rolling down a hill,â€ said Lori Lynch, executive director of the LGBT Visitor Center. â€œSo much so, it might just snow during the event.â€

The jolly old elf himself will be making a special guest appearance and posing for selfies at the event which will feature complimentary cocktails by GREY GOOSEÂ® Vodka, Bacardi brands and Barefoot Wine and Bubbly. A lavish buffet from Centerplate and Crepe Maker will be served against the backdrop of DJ/Producer Maximus 3000 playing holiday and contemporary favorites. Additional support will be provided by GAP Inc., which will furnish Santaâ€™s helpers for the event, and the Miami-Dade Gay & Lesbian Chamber of Commerce (MDGLCC).