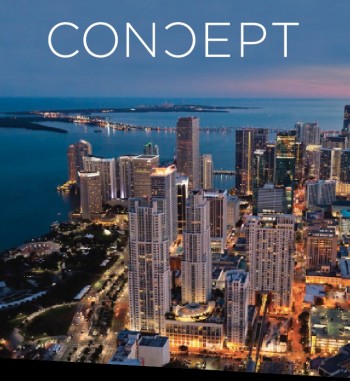 Concept Miami will focus on “fresh-to-market” and secondary market artwork, as well as works by blue-chip artists and modern contemporary masters. Limited to approximately 30 carefully selected dealers, the fair has been designed as a sophisticated, elegant waterfront oasis for collectors during the frenetic Art Basel Week. The fair is located within the downtown Arts & Entertainment District, adjacent to the Perez Art Museum Miami and the Frost Museum, two of Miamiâ€™s most prestigious visual arts institutions, and in proximity to all major downtown hotels and Brickell World Plaza, one of the largest banking centers in North America. Concept will be open until 10pm each night, giving visitors additional time to view the artwork after other December fairs close, and operating on a schedule more conducive to Miamiâ€™s relaxed atmosphere, later dining hours and vibrant nightlife.

The inaugural edition of Concept, a new art fair for downtown Miami during Art Basel Miami Week, will launch December 2nd through 7th aboard the SeaFair yacht docked at Bayfront Park as it awaits its permanent location to open in 2015 at Miamiâ€™s Museum Park. Modern and contemporary art, installations, performances, and cutting edge audience engagement technology will be presented in the intimate and luxurious SeaFair exhibition space and surrounding park, delivering a distinct and decidedly refined art fair experience for the public and veteran collectors alike.

Concept aims to position its exhibitors and attendees at the center of Miamiâ€™s expanding Arts & Entertainment District amidst one of the worldâ€™s fastest growing cities and luxury markets. With a roster of international blue-chip galleries primarily presenting newly available secondary market modern and contemporary masterpieces, Concept will appeal to seasoned art fair veterans and art market professionals interested in portfolio worthy investment pieces.

Visitors to the dome will have one of the first publicly accessible opportunities to view Ai Weiwei and Navajo artist Bert Benallyâ€™s collaborative time and land based installation Pull of the Moon. Exhibited in the remote Coyote Canyon last June for the TIME (Temporary Installations Made for the Environment) Land Art program, the temporal sand paintings that incorporated the mediums of fire, sound, and powdered porcelain were documented in the video and will premier at the vernissage event for Concept, with repeat viewings throughout the fair.

In addition to the Pull of the Moon film, the dome will feature In the Round, a program of artists inspired by indigenous cultures selected to have their work translated into moving graphics formatted for the specialized dome projection, including; Seminole artist, designer and metalsmith, Kenneth Johnson; animated paintings by Navajo artist, Tony Abeyta; and a New Mexico Arts featured Art in Public Places project, Blue Flower, by Federico Muelas.

Additionally, open and free to the public, is an interactive video featuring graffiti artists Jaque Fragua, from Jemez Peulo, and Yattika Star Field, of the Seminole tribe, Oklahoma, Friday and Saturday at 9:00pm.

Performances
Spencer Battiest and Zachary Battiest, Seminole artists and rappers, whose video art will also be featured in the Experimental Dome Project, will perform aboard the SeaFair on Friday and Saturday night at 8:00pm.

The performance is a fundraiser for iLSAF (the international Land Sensitive Art Foundation) a tax-exempt organization that supports programs like TIME, and the NM Arts Exchange Program. Tickets are $45.00 in advance online, or $50.00 at door. Advance reservations are recommended.