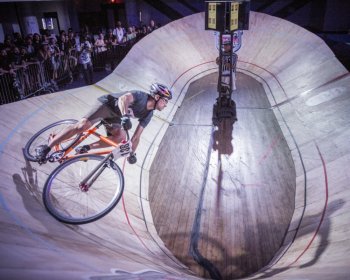 Fixed-gear riders from across the South will take their talent to the track in a test of mental stamina, technical precision and raw strength at Red Bull Mini Drome in Miami on November 8. From its original debut in New Zealand and its roots across the pond, Red Bull Mini Drome will come back for another lap in the states with a stop at Mana WynwoodÃ¢â‚¬â€a prominent hub for innovation in the Wynwood Arts District.

For starters, a fixed-gear (more affectionately known as a fixie) is a bicycle in its purest, simplest form– no gears and sometimes no brakes. Often considered the ultimate marriage between man and machine, a sub-twenty-pound piece of machinery is the only thing separating your body from the hard, unforgiving ground below.

At Red Bull Mini Drome, skill, speed, balance, and braves are brought together on this steep, shrunken down version of the traditional velodrome. With track speeds exceeding 30mph and course measurements of 46 ft. x 24 ft. and 8 ft. high at the end banking, it is sure to be one of the most challenging and treacherous thrill rides to hit the fixed-gear scene. Competitors will need to pedal hard and watch the ledge if they want to take home the winning title.