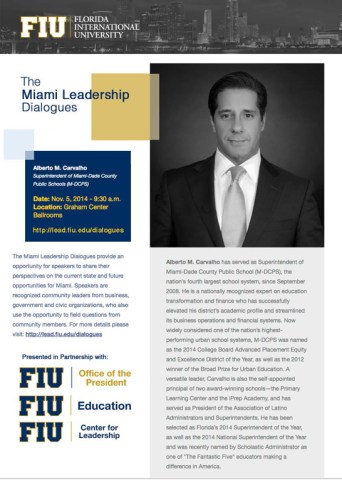 Alberto M. Carvalho, Superintendent of Miami-Dade County Public Schools and one of the most admired education leaders in the U.S., will share his insight and vision at Florida International University (FIU) on Wednesday, November 5, 2014 at 9:30 a.m. The event, free and open to the public, will be held at the Graham Center Ballroom on FIUÃ¢â‚¬â„¢s Modesto Maidique campus.

Ã¢â‚¬Å“The Future of Education: A Conversation with Superintendent Alberto CarvalhoÃ¢â‚¬Â is part of the annual Miami Leadership Dialogues created and presented by the FIU Center for Leadership at the College of Business, in partnership with the Office of the President and, this year, the College of Education.

Carvalho was honored by President Barack Obama and U.S. Secretary of Education Arne Duncan at a White House ceremony on May 1, after he was selected as National Superintendent of the Year by AASA, The School SuperintendentÃ¢â‚¬â„¢s Association.

Carvalho has served in his current position since 2008. He is a nationally recognized expert on education transformation and finance who has successfully elevated his districtÃ¢â‚¬â„¢s academic profile and streamlined its business operations and financial systems. Now considered one of the nationÃ¢â‚¬â„¢s highest-performing urban school systems, Miami-Dade was named as the 2014 College Board Advanced Placement Equity and Excellence District of the Year, as well as the 2012 winner of the Broad Prize for Urban Education.

A versatile leader, Carvalho is also the self-appointed principal of two award-winning schools, the Primary Learning Center and the iPrep Academy, and has served as President of the Association of Latino Administrators and Superintendents.

Carvahlo was recently named by Scholastic Administrator as one of Ã¢â‚¬Å“The Fantastic FiveÃ¢â‚¬Â educators making a difference in America. He has been awarded a number of honorary degrees including a Doctor of Public Service by FIU and has been featured on CNN, NBC, and ABC and in publications such as The New York Times, The Wall Street Journal, District Administration Magazine and The Christian Science Monitor.

The Center for LeadershipÃ¢â‚¬â„¢s annual Miami Leadership Dialogues provide an opportunity for speakers to share their perspectives on the current state of, and future opportunities for the South Florida community. Speakers are recognized community leaders from business, government and civic organizations, who also use the opportunity to field questions from community members.

To register for the event for free please follow the event link provided and save your seat today.