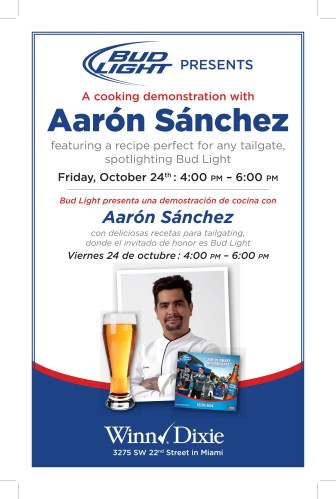 Winn-Dixie and Bud Light invite shoppers to learn how to add a burst of flavor to their tailgate festivities during a special live cooking demonstration featuring celebrity Chef Aaron Sanchez. Known as one of the countryâ€™s leading contemporary Latin chefs, a co-star of Food Networkâ€™s hit series, Chopped, and FOX Lifeâ€™s #1 rated series Aaron Loves NY, Sanchez will share a variety of lager-infused recipes that attendees can cook-up to complete their ultimate tailgate party, including Grilled Pork Tenderloin with Aaronâ€™s Adobo, Mussels with Bud Light and Garlic-Chipotle Love, and Salsa Verde.

New York-based Chef Aaron Sanchez is a renowned chef, restaurateur, television personality, author, spokesperson and entrepreneur. Sanchez has appeared at the White House as a guest chef and received the â€œNational Awardâ€ at the Flavors of Passion Awards, honoring the nationâ€™s best Latin chefs. He is also a Chef Ambassador for â€œWhy Hunger,â€ a leader in building the movement to end hunger and poverty.