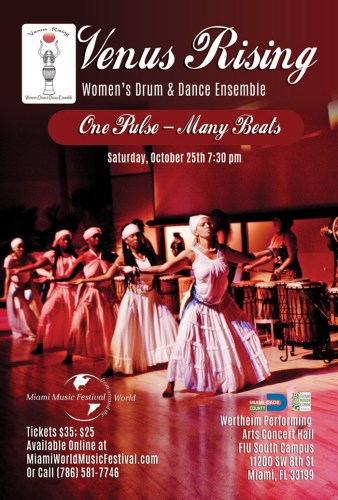 Last year, Venus Rising WomenÃ¢â‚¬â„¢s Drum & Dance Ensemble made their debut at the Miami World Festival from around the World with their performance of an Ã¢â‚¬Å“An Afro Roots Rhythmic Journey.Ã¢â‚¬Â The presentation earned them a standing ovation and an invitation to return this year for a repeat headline slot. This year, Venus Rising will present Ã¢â‚¬Å“One Pulse Ã¢â‚¬â€œ Many BeatsÃ¢â‚¬Â on October 25, 2014 at the Florida International UniversityÃ¢â‚¬â„¢s Wertheim Center for the Performing Arts Concert Hall (11200 SW 8th Street, Miami, FL 33199). The musical celebration begins at 7:30 p.m.

Ã¢â‚¬Å“WeÃ¢â‚¬â„¢re honored and thrilled to be performing once again at the Miami World Music Festival,Ã¢â‚¬Â says troupe founder and leader Zeva Soroker. Ã¢â‚¬Å“Last yearÃ¢â‚¬â„¢s presentation focused on the rich traditions of our African roots. This year, we will be focusing on our groupÃ¢â‚¬â„¢s diversity through our continued exploration of the traditional music of Africa, the Caribbean, Brazil and the Middle East.Ã¢â‚¬Â The Connecticut-born Soroker began playing drums in Jamaica and continued her studies in Guniea, West Africa. She is currently a drum instructor at the The Goddess Store in Hollywood.

The Miami World Music Festival, under the artistic direction of Dr. Adolfo Vidal, was created by the South Florida Friends of Classical Music, a non-profit organization to encourage and support classical music performances and the musical heritage of countries around the world. The annual festival features academic, traditional and contemporary music from diverse cultures performed by acclaimed world-class artists. In addition, the 2014 festival will also be presenting Michael Linville and Vidal with percussionist Fellows from the New World School of the Arts performing Two Pianos & Percussion, featuring the music of Argentina (Astor Piazzola) and Hungary (Bela Bartok).