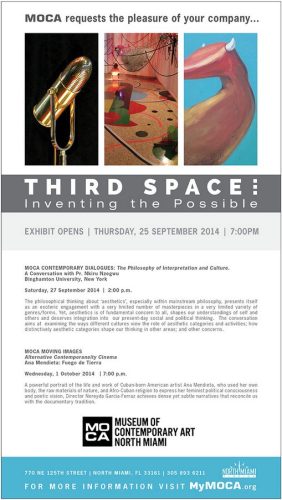 This visual story is one that has not yet been told. Not because there is no storyteller to tell it, but because it exists only in fragments each assuming its own autonomous existence removed from the constraints of mainstream history.

THIRD SPACE Inventing the Possible is the story of visual artists who defy their otherness and enter the realm of 21st century aesthetics not only to lay their historic claim on it, but also to challenge the framework which defines and polices its boundaries. This exhibition engages Miami artists in their articulations of the lines of continuities. What comes out is that we do not cease to be related simply because separated by race, nationality or color.