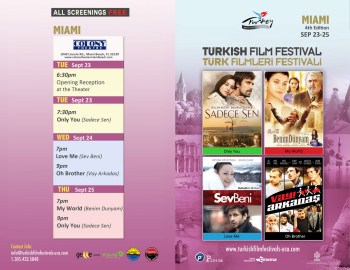 After three successful runs, the 4th annual Turkish Film Festival returns to Miami from September 23rd thru the 25th. As it is customary, all screenings will take place at the Colony Theater located at 1040 Lincoln Road and are free and open to the public.

This year, the festival will be showcasing four feature films that represent the best Turkish Cinema has to offer. Opening the festival on September 23rd at will be Only You. Directed by Hakan Yonat, this is the love story of Hazal, a visually disabled young woman and Ali, a former boxer. On September 24th, the festival will feature Oh Brother, directed by Kemal Uzun. This hilarious comedy adventure sees three friends attempt to turn their lives around only to find themselves in a whole heap of trouble. Also on September 24 will be Love Me. Co-directed by Marina Gorbach and Mehmet Bahadie Er, Love Me is an idiosyncratic comedy-drama sprinkled with hilarious notes of cultural clashes and endearing displays of kindness that will warm audienceâ€™s hearts in the most unexpected way. On September 25th, the festival will be closing with a screening of My World. Directed by Ugur Yucel, My World is inspirational drama about a devoted teacher who helps a deaf and blind girl to live with her disabilities.