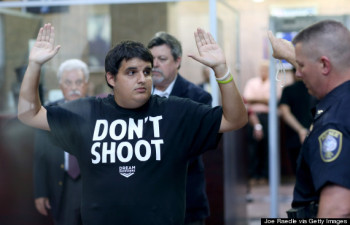 This past Thursday eight protestors were arrested in Miami during a demonstration against the death of Michael Brown in Ferguson, Missouri and against the death of local teenager Israel Hernandez in 2013. Both killed were only 18 years of age and both were unarmed. Phil Agnew, who organized the protest stated that the death of both of these young men shows, â€œproof that racist police departments around the country will continue to use black and brown bodies for target practice.”

The protestors organized by Phil Agnew call themselves the Dream Defenders. Last Thursday they protested in the lobby of Miamiâ€™s federal justice building. They raised their arms in silence hoping to get a meeting with U.S. Attorney Wifredo Ferrer, who works with the Southern District of Florida.

Eight protesters refused to leave the building when Police asked them to exit, as the building was about to close for the day. Those eight were arrested and put in plastic handcuffs. Marcia Olivo, one of those arrested, stated, â€œWeâ€™re the voice of the mothers in our community who live in constant fear of not seeing their children come back.” Another protestor arrested, Curtis Hierro stated, â€œWe need more and more folks to take this type of action and make it very clear that we need action on the part of our elected leadership and the folks in the Department of Justice.”

As Miami residents how do you feel about the eight protestors being arrested? What do you think needs to be done to prevent more deaths like this from happening? Tweet us at @Loop305 with the hash tag #TalkAboutitTuesday