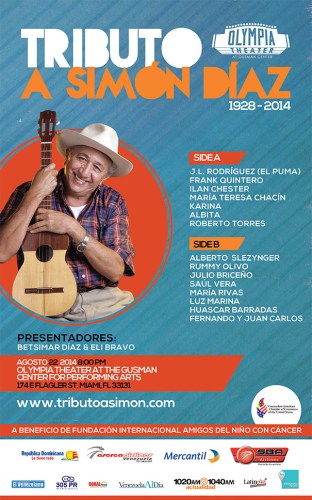 More than a dozen musicians come together to celebrate the life and legacy of one of the most recognized and beloved artists of Venezuela: SimÃ³n DÃ­az.

Many around the world have heard some version of â€œCaballo Viejoâ€ including Gipsy Kingâ€™s â€œBamboleo,â€ unaware of who the composer is, but for Venezuelans he is perhaps the greatest representative of their folklore and one of their countryâ€™s icon: Simon Diaz.

For 6 decades, SimÃ³n DÃ­az, was part of the popular culture of Venezuela and became, without doubt, one of the most beloved characters of the country as a singer, songwriter, actor, comedian, television talk show host and cultural promoter.

On August 22, a constellation of stars will be offering a tribute to Simon at the Olympia Theatre at Gusman Center for the Performing Arts. A show that will take the audience on a journey through the musical life of the singer, with anecdotes, memories and lots of music. Under the musical direction of Carlos Puchi, guest artists will perform his most famous compositions, such as â€œCaballo Viejo,â€ â€œSabana,â€ â€œMi Querencia,â€ â€œTonada de Luna Llena,â€ â€œMercedes,â€ â€œEl Loco Juan Carbinaâ€ and many more.

The fame of SimÃ³n DÃ­az went beyond Venezuelaâ€™s borders and his songs were performed around the world by artists such as: Mercedes Sosa, Joan Manuel Serrat, Julio Iglesias, Richard Clayderman, Ray Conniff, Gipsy Kings, Roberto Torres, Caetano Veloso, Danny Rivera, Cheo Feliciano Gilberto Santa Rosa, among others. They were also translated into several languages. In September 2008, he was awarded a Latin Grammy for their Lifetime Achievement Award.