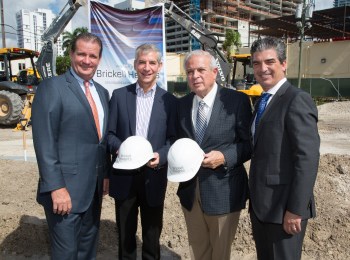 City Officials Joined The Related Group to Celebrate a Day of Milestones:

The launch of Paraiso Bayviews by Karim Rashid, and the start of construction at Paraiso Bay and Brickell Heights

The Related Group celebrated three milestones last week with groundbreakings at Brickell Heights and Paraiso Bay followed by the launch of their latest project, Paraiso Bayviews with Karim Rashid. Hundreds of VIP brokers attended the dayâ€™s events across Miami, and those involved in preconstruction sales took home more than $9 million in commission checks.

Mayor Tomas Regalado and Commissioner Marc Sarnoff, who were present at the two groundbreakings, congratulated The Related Groupâ€™s team on the new projects, which they noted are creating a 24-hour urban core in the Brickell area, and reenergizing the Edgewater neighborhood.

At Brickell Heights, located next to the two-million-square-foot development Brickell CityCentre, David Rockwell has created a sleek glass-walled lobby, glamorous amenity spaces with a private-club vibe, and lavish pool terraces. The 690 luxury residences will sit atop a 30,000-square-foot Equinox Fitness Center and SoulCycle, a state-of-the-art workout studio that will open its first Miami location at Brickell Heights.

At the launch of Paraiso Bayviews, international interior and industrial designer Karim Rashid was on hand to greet the guests. For his second project with The Related Group, Rashid has evolved his trademark colors and bold shapes for a more subdued organic design with softer hues and natural woods inspired in the Paraiso communityâ€™s garden bay front setting. Residents of Bayviews, described as the best value within the Paraiso community, will enjoy all of Paraisoâ€™s luxury amenities including a rooftop swimming pool, tennis courts, a beach club, marina, gardens by Enzo Enea, a signature restaurant by Michael Schwartz, and more.