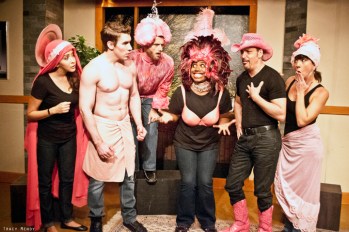 The Shorts Gone Wild 2 play line-up includes:
Lion in a Bear Bar by Michael McKeever
Sarah Stein Sends a Selfie by Michael McKeever
I Alone by Christopher Demos-Brown
The Emperor Is Naked! by Michael Leeds
The Last Time I Saw Bathhouse Betty by Tony Finstrom
A Bump Between Friends by Fielding Edlow
Game On by Gary Garrison
Glamping by Carey Crim

Tickets are $30, and are now on sale to the general public. Shorts Gone Wild 2 will open on Thursday, August 7 and play through September 7, 2014. The official Opening Night ceremony will take place on Saturday, August 9 at 7:30 p.m. Evening performances will be held Thursday through Saturday at 8 p.m., with afternoon matinees on Sunday at 5 p.m. Tickets may be purchased through the Island City Stage box office by calling (954) 519-2533, or online at www.islandcitystage.org.