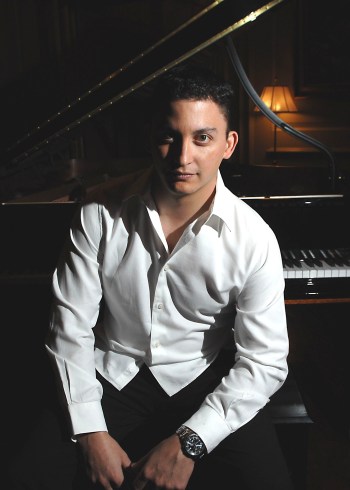 The Martin Bejerano Quartet, wiith Dave Fernandez on sax, Josh Allen on bass, and Ben Falle on drums, will perform at the Museum of Contemporary Art Friday, July 25, from 8 to 9:15 PM.

Winner of third place in the prestigious 1999 Great American Jazz Piano Competition, Martin moved to New York City in the summer of 2000 to pursue a career in jazz. In less than a year, he was asked to join the quartet of legendary jazz drummer Roy Haynes, earning a Grammy nomination in 2004 for Best Instrumental Jazz Album. In January 2002, Martin also joined internationally acclaimed guitarist Russell Maloneâ€™s quartet, and continues to tour and record with both these groups. Martin has performed most of the major jazz festivals, clubs and venues around the world with such jazz luminaries as the Christian McBride Band, Kenny Garrett, Roy Hargrove, Adam Nussbaum, Lonnie Plaxico Group, Ignacio Berroa, Mingus Big Band, Arturo Sandoval, and even traded choruses with the legendary Chick Corea. Martin’s career as a solo artist has also begun to blossom with his debut CD as a leader, Evolution/Revolution released in 2007 to high critical praise. Martin has performed with his group at Dizzy’s Club Coca Cola, Arturo Sandoval’s Jazz Club, The Kitano, The Jazz Gallery, and was recently awarded the prestigious New Jazz Works composer/ensemble grant from Chamber Music of America. Currently Martin spends his time between Miami and New York City, and holds teaching positions at the University of Miami and Broward College.

The concert is free for all ages. MOCA is located at 770 NE 125th St in North Miami. Visit mocanomi.org for more details.