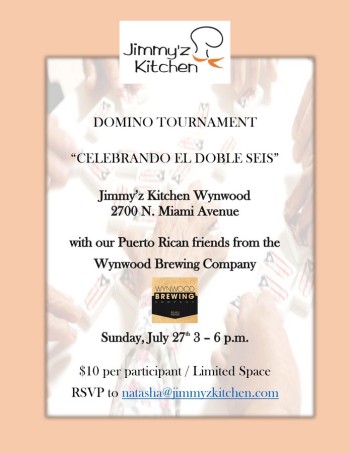 Jimmyâ€™z Kitchen Wynwood will celebrate a Domino Tournament – â€œCelebrando el Doble Seisâ€. The cost per player will be $10. RSVP for participation is required by sending an email to natasha@jimmyzkitchen.com.

Chef Jimmy Carey recently announced the second annual Domino Tournament – Celebrando el Doble Seis – to be held at Jimmyâ€™z Kitchen Wynwood. The Puerto Rican tradition of playing â€œdouble sixâ€ dominoes will be honored during the tournament. â€œWe have always strived to bring back the Puerto Rican traditions to Wynwood – known as Little San Juan for its original population of Puerto Ricans. We started the Noches de Bomba y Plena which have been a great success and for the second year we are hosting a domino tournament of â€œdouble sixâ€ – the way itâ€™s played in Puerto Rico.â€ commented Carey.

For the tournament, Chef Jimmy has invited his friends, and owners of Wynwood Brewing Co, Luis and â€œPopsâ€ Brignoni to serve, for the first time, two of the breweryâ€™s beers. The Brignonis, originally from Puerto Rico, are also great supporters of keeping alive the Puerto Rican traditions of Wynwood.

Named as â€œBest of Miamiâ€ for its Puerto Rican Mofongo, Jimmyâ€™z Kitchen has been known for its casual and contemporary atmosphere and for fun gatherings in the plaza in front of the restaurant.

Participation in the tournament costs $10 per person but the restaurant encourages friends and family to come and cheer the participants. Prizes will be awarded to the top four players.

RSVP is required for participation at natasha@jimmyzkitchen.com. For further information please contact NataschaOS@nos-communications.com.