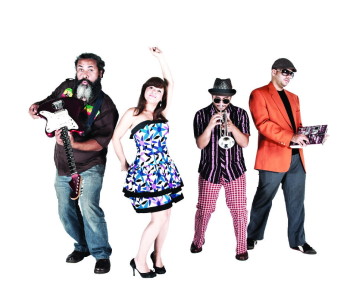 Elastic Bond is a Miami based group of new generation multicultural Latinos, who incorporate music from the past in order to make music for the future. Their music has been described as alternative combined with an urban edge and a tropical twist. The band was created while doing a project for Venezuelan producer Andres Ponce. Andres met singer/songwriter Sofy Encato through mutual friends in 2004. They began collaborating and started working on tracks together which eventually led to the creation of Elastic Bond.

In 2006 Elastic Bond released an independent album called, â€œMadrugada.â€ The album has been described as a lounge electronica sound, which showcases Ponceâ€™s instrumentals, Encantoâ€™s vocals and features guest musicians from the Miami music scene. Not long after the release of this album Elastic Bond was performing all over town. Â They collaborated with the guitar sounds of Buffalo Brown and David Burgos on the trumpet. In 2007 they released their second independent album called, â€œExcursion,â€ which featured artists such as, â€œOrionâ€ and Livan Hernandez.

Their latest album, â€œREALâ€ is based on well-crafted pop songs with catchy melodies. The album has a unique style of urban tropical funk which is sung in English and Spanish.

Check out the music of Elastic Bond: Here!

Who are your favorite Miami based artists? Let us know on Twitter at @Loop305 with the hash tag #MusicMonday