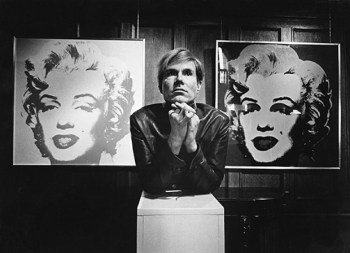 Kids ages 6-12 are invited to tour The Influencers II exhibition and learn about the elements of art by painting, drawing and sculpting in the style of renowned artists in the exhibition. Parents and visitors are encouraged to stay and create a special project with their children based on the legendary artist Andy Warhol.

Renowned artist Andy Warhol was born Andrew Warhola in the working-class neighborhood of Oakland in Pittsburgh, Pennsylvania. At an early age, he was afflicted with a rare neurological disorder which pushed him to take comfort in a world of his own within celebrity magazines and DC comic books. As a young adult, he experimented with several invented adaptations of his own identity. In this exploration, he decided to drop the â€œaâ€ from his last name upon moving to New York.

Warhol graduated with a degree in Pictorial Design from the Carnegie Institute of Technology in 1949. New York proved to be a successful move for Warhol as he found abundant work as a commercial artist. He worked with posh companies such as Columbia Records, Glamour Magazine, Harperâ€™s Bazaar, NBC, Tiffany & Co., and Vogue. Warhol established his career as a praised graphic artist then shifted his focus to painting and drawing. Warholâ€™s paintings and prints grew to incorporate the techniques he developed as a commercial illustrator. In 1956, The Museum of Modern Art included him in his first group show.

It was the work he produced in the 1960â€™s and early 1970â€™s that solidified Warhol as a national icon. Becoming the symbol for the movement Pop Art, Warhol is best known for his iconic paintings of Campbellâ€™s soup cans, Coca Cola bottles, and portraits of Marilyn Monroe.