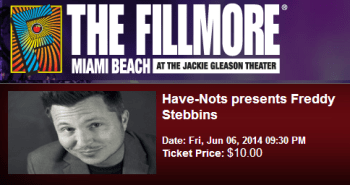 In his dynamic one man show “Miami, Don’t Feed the Natives” Miami’s uber-talented comedian/actor FREDDY STEBBINS, brings seven of his best native personas to life onstage. Sharing their lives, eccentricities, problems, laughs, music and uniquely Miami opinions, Stebbins gives us a comical glimpse at the new type of Natives that call Miami home in the 21st century. From an overenthusiastic divorced Latina diva in Hialeah, to a 93 yr old retired Jewish Stand up-comic, a gregarious yet overbearing anti-Castro Middle aged Cuban Exile, a sexually repressed Anti-immigrant cracker “preacher”, a young pirate radio DJ from Trinidad in Overtown, or perhaps a seance with legendary Puerto Rican astrologer “Walter Mercato” – Freddy Stebbins brings these and other uniquely “305” personalities to life. Coupled with interviews and videos featuring the truly bizarre yet funny oddities of this “jungle” he calls Miami.