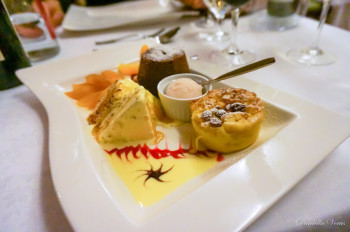 Ristorante Dorando is a delectable spot located in the nostalgic, ancient walled city of San Gimignano. Dorando has earned a reputation as one of the best places to dine at in this quaint city and is included in the cityâ€™s Michelin Guide. The restaurantâ€™s 14th century arched brick walls and ceiling lends it a historically gorgeous veneer. It was such a joy to dine in a unique and venerable setting where you feel as if you were taken aback to a historic wine cellar (which, funny enough, we actually happen to be in.) 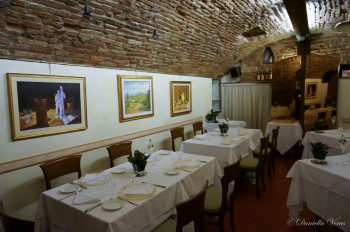 Ristorante Dorando adeptly fuses classic Tuscan dishes with a modern and creative flair. The plates are attractive as well as delicious.Â  The home grown and cordial Chef Duccio presented some of his classic dishes and enlightened us about the history of Etruscan food, the restaurant and of his city.

We started with the Quail and Onion Stuffed of Salt with her own Jam Sweet-sour and Celeriac of Truffle. The onion had its top cut off and was filled with some amazing you guessed it, braised onions. There was a sunny side up egg with large flakes of enchanting black truffle. The moist quail was served â€œbone-inâ€ Â sprinkled with truffle flakes, almost like fancy chicken wings. It was a beautiful and creative dish with such a unique flavor we had never experienced. All these divergent flavors melded together delightfully into a scrumptious taste. 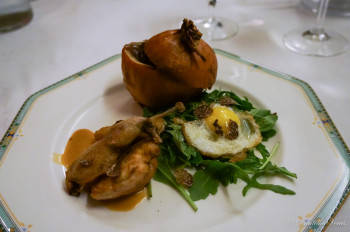 The Pumpkin Cream Soup Flavored with Truffle induced a magnificent chorus of MMMMMM’s around our table. The soup had a marvelously deep and creamy pumpkin flavor that enveloped Â our mouths with a majestic undertone of truffle. It was a transcendent soup that elevated pumpkin to a whole new plane for us. 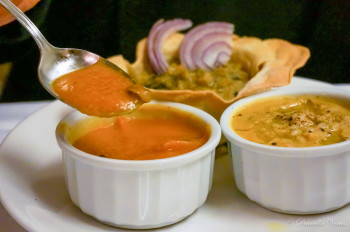 A dish that really surprised us was the Pasta Rolls filled of Rabbit in Vernaccia of San Gimignano Wine with Olive Oil of Herbs. Who knew that rabbit is absolutely delicious? This newfound amazing rabbit flavor was cooked in a pleasing sauce and imbedded in a gargantuan pasta purse. Long wedges of pecorino cheese (sheep cheese) were draped over the mammoth pasta purse. It was a remarkable dish that will have us looking at elementary classroom pets quite differently from here on out. 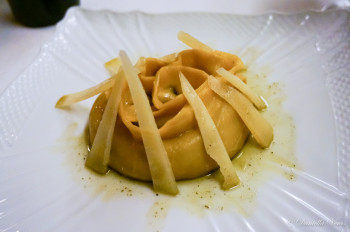 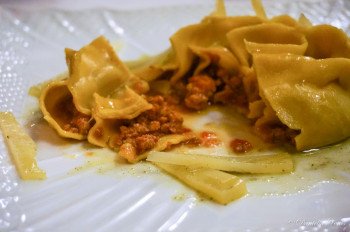 We had been so immensely impressed with our meals in Italy with the exception of desserts. While most of our restaurants were the best meals of or lives, when it came to dessert we were truly disappointed. Dorando broke that mold with its Ginger Apple Pie with Delicate Cream, Macaroons, Pine seeds and Raisins. The ginger was a sensational and brilliant addition to apple pie. It added such a nice zesty kick and complemented the sweetness of the pie so creatively.

We also tried the Semifreddo that had a potent anise taste to it. It was profoundly refreshing and compellingly flavorful. The Shedonist loved it so much that she would come back to Dorando even if she could only order this dessert. 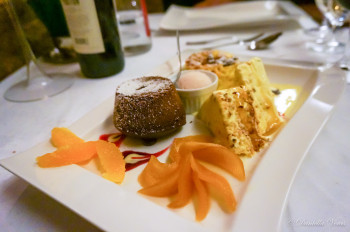 Ristorante Dorando was an incredible delight to indulge in. The food was terrific, the ambience was rare, alluring and historic and the service was so warm and accommodating. Not only did we have a sublime meal but we also learned a tremendous amount about Tuscan food and the history of San Gimignano.