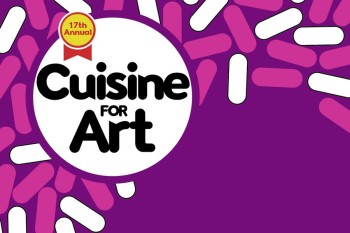 The Centerâ€™s Cuisine for Art fundraiser features elected government officials and community leaders serving as Celebrity Waiters for an exciting and entertaining evening.

The evening begins at 6 pm with a cocktail reception, in which wine, vodka, and beer are served while ticket buyers bid on fabulous silent auction items such as incredible vacation packages, beautiful gift baskets, and more.
Dinner begins at 7 pm for more than 300 people with the â€œMarch of Celebrity Waiters,â€ followed by a three-course meal, musical entertainment, a live auction, and the presentation of this yearâ€™s honoree, WLRN radio host Ed Bell.

The Seminole Hard Rock Hotel and Casino is the presenting sponsor for Cuisine for Art. This yearâ€™s Cuisine for Art features special musical performances by 13-year-old singing sensation Julia Dale â€“ the Miami Heatâ€™s â€œgood luck charmâ€ â€“ and classically trained electric violinist Randi Fishenfeld. Fantastic experiences, such as being â€œSheriff for the Day,â€ a ride on the Goodyear Blimp, and a VIP California Wine Tour, will be auctioned in the exciting live auction.
Seminole Paradise and the Galleria Mall Fort Lauderdale will award gift certificates and other prizes to guests at the two tables who raise the most gratuities in honor of their Celebrity Waiter. An after-party for ticket buyers occurs at a Seminole Paradise hot spot for those who want to keep the party going following this fun-filled fundraiser.

This Yearâ€™s Honoree: Ed Bell
Now in his 43rd year as a radio producer and host on the South Florida airwaves, WLRNâ€™s Ed Bell has devoted his broadcasting career to exposing and elevating the arts for South Florida radio listeners. Getting his start on WVUM while attending the University of Miami in the early seventies, he regularly presented the recordings of local musicians on WBUS andWTMI, as well. He joined WLRN in 1977. For his dedication to Americaâ€™s music Bell was honored as Best Local Jazz Advocate by New Times in their June 1995 Best of South Florida issue. Other production credits include co-founding and co-producing The Hollywood Jazz Festival (1983 â€“ 1986) and co-founding The Sunshine Jazz Organization, a Jazz support not-for-profit. He was honored with a Visionary Award from The Miami Beach Arts Trust (2009) and an Arts Hero Award from The Arts and Business Council (2010). His work on his radio show South Florida Arts Beat was honored in 2009 with a Society of Professional Journalists Award. His mission continues every Friday at 1:00pm on WLRNâ€™s South Florida Arts Beat.