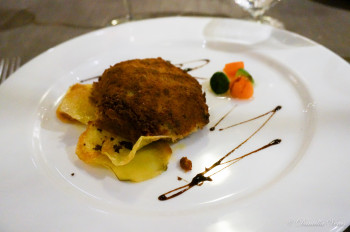 Our first true Italian meal was at the luxurious Sapori del Lord Byron. This resplendent restaurant is located in the five-star Lord Byron Hotel, about a 10-minute drive north of the touristic Roman circle. It boasts only 32 rooms and prides itself on being an under the radar establishment frequented by politicians and affluent foreigners. Sapori is included in the Rome Michelin Guide and has an antique, yet modern-aristocratic country club ambiance. The atmosphere coupled with exquisite service makes its patrons feel as if they were descended from noble origins.

The service at Sapori del Lord Byron was nothing short of impeccable. Nicola is a soft spoken, sweet and attentive sommelier that advised us on some immaculate wine pairings and shared insights on the art of wine, all with a warm, inviting smile. While most of our waiters in Miami struggle with our native tongue, our gracious and astute multilingual waiter, Alessandro speaks four: Italian, French, English and Spanish. They were both so amiable and meticulous the entire night, which speaks volumes, since most dinners in Rome last for over three hours.

The Crunchy Polenta Horn stuffed with Creamy Cod served with rosemary flavored chickpea puree was a creative treat. The smooth polenta had awesome chunks of flavorful cod. The cone was made of a fantastic crust that literally shattered deliciously in the mouth. 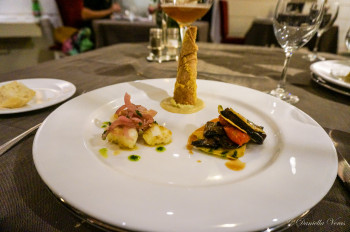 The Eggplant Parmesan contained a soft noodle exterior with a side of pesto and topped with fresh basil leaves that blended together beautifully. It also included fried eggplant sticks that added a great crunchy layer of texture to this tasty plate. 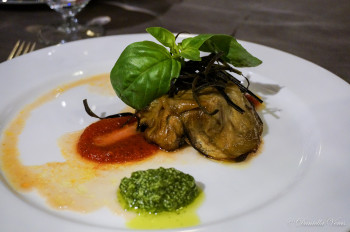 The traditionally Tuscan Pappa al Promodoro was prepared with toasted bread, tomatoes, garlic, pepper and in a not-so-traditional twist â€“ seared scallops. The original traditional pappa al pomodoro, specifically from Siena, is considered of poor peasant origin (cucina povera) as it used to be prepared by housewives who made a soup out of the left over bread (pana toscano) so not to waste anything. The addition of the perfectly cooked, tremendously juicy scallops took this dish to another level and complemented the pomodoro majestically. 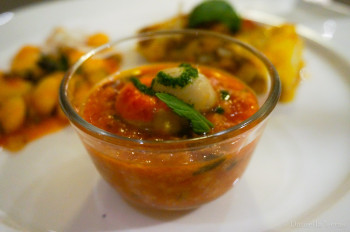 The Lasagnetta (mini lasagna) was by far the best lasagna we have ever experienced and our favorite dish of the night. This glorious pasta would turn fatass Garfield into a body builder, if his owner used it as a workout incentive. It was comprised of Parmesan, mozzarella, basil and Bolognese. This is an eyes-roll-into-the-back-of-your-head orgasmic bite. The top layer was deliriously crispy and the sauce has this alluring tang that left your tongue begging for more. This was the epitome of lasagna for us that all others shall be compared to from hence forth. 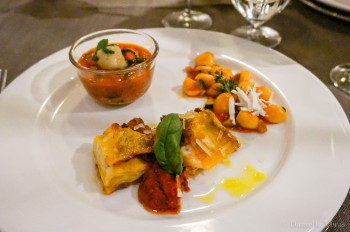 The final dish blew our minds in creativity, scent and taste. It was a Deep Fried Beef Tournedo with a riveting fried crust made of Umbrian cheeses. It was a dish so beautiful that we let sit in front of us for a solid minute to take in the euphoric smell before we dived in. The intoxicating scent would make even the most anorexic French model succumb to its temptation. It came with crunchy potato chips, sublime grilled honey vegetables and a touch of sweet balsamic glaze. We have had various types of crusted steaks before but never one with such a rich fried exterior that was such a pleasure to devour. 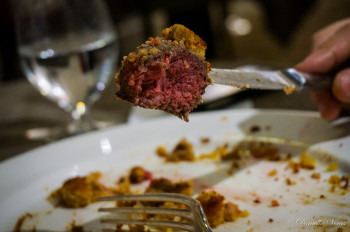 Our dinner at Sapori del Lord Byron was a grand and memorable feast fit for royalty. The stately setting, superb service and scrumptious cuisine make this a very special Roman restaurant to experience and enjoy.