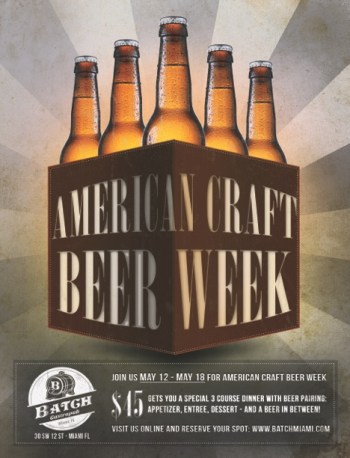 Batch Gastropub in Miami will join in on the nationwide celebration with a week full of events for American Craft Beer week Monday, May 12 through Sunday, May 18. American Craft Beer Week is the national celebration of the craft beer revolution. By celebrating with Batch you are promoting flavorful and interesting world-class craft beers produced by local small and independent brewers. Gather up your beer enthusiast friends at Batch to honor the craft beer community.

Batch Gastropub sets out to create a unique dining and drinking experience. Toast to a hard day’s work with a three course meal & different craft beers in honor of the Craft Beer week. Guests will be welcomed with a specialty beer cocktail such as, The Ginger Shandy, a fusion of Funky Buddha Floridian with lime, simple syrup and ginger beer poured over ice, following its daily three course meal that includes an appetizer, entrÃ©e and dessert with a beer in between for $45. Featured beers include Samuel Adams, Funky Buddha, Gravity Brewlab, Wynwood Brewery and Cigar City.