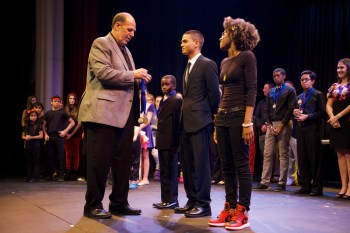 Before beginning his original spoken word piece for the Young Talent Big Dreams finals, David Woodward paused in front of the microphone and closed his eyes, seeming to disappear.

Then he opened his eyes and launched his emotional performance, a fusion of words and gestures that spoke of the frustration and sometimes fury of the many boys and young men in Woodwardâ€™s Little Havana neighborhood who seek to rise above their poverty and shatter the stereotypes that weigh against them.

For his originality and creativity, Woodward, a 16-year-old junior and one of the top writers in his AP English course at SLAM Miami Charter Middle/High School, was named the overall Grand Prize Winner of Young Talent Big Dreams. This year marked the fourth and most ambitious rendition of the countywide talent contest, coordinated by the Actorâ€™s Playhouse at the Miracle Theatre and sponsored by The Childrenâ€™s Trust.

The cadre of judges, all professional artists or art critics, chose Woodward over a host of amazingly talented young musicians, dancers, composers and wordsmiths performing in a range of categories, both individual and group. For the top prize, Woodward received $500 in cash and a free trip for two â€“ air fare, hotel and passes â€“ to attend the live American Idol finale in Los Angeles, CA, courtesy of WSVN CH7.

Woodward, whoâ€™s been rhyming, rapping and creating original poetry since elementary school, credited his English teacher, Crystal Espinosa, at SLAM for helping him craft his award-winning performance piece. With her guidance, he revised the piece more than twenty times, working steadily on it for more than a month.

â€œThough I like to write, I wasnâ€™t much of a reader before. The experience of competing in YTBD really taught me about perfecting my writing craft,â€ said Woodward, nicknamed the â€œsilent assassinâ€ by his classmates for the riveting power and precision infused in his work.

Winners were chosen for each of the categories, and 27 acts competed in all in the finals held Saturday, May 3 at the Actorâ€™s Playhouse. These contestants were selected from the hundreds that participated over the past four months in the total seven auditions held at venues around the county.

â€œEvery year the talent gets better and better, and the dreams get bigger and bigger for this competition,â€ said Charles M. Auslander, president and CEO of The Childrenâ€™s Trust, adding that â€œThe Trust is dedicated to helping to encourage the dreams of the children of Miami-Dade County.

Throughout the finals night as he has at all the auditions, emcee Earl Maulding kept the audience caffeinated with his infectious good humor as he sang the high praises of the performers who were competing and those who auditioned over the past few months.

Â¨These kids are just beyond believing. For many of them this contest is the first time that they walk onto a stage for an audition, but to hear and see them â€“ youâ€™d never know it. Their talents â€“ and courage â€“ are just off the charts,â€ commented Maulding, who directs the Young Audiences Theatre at Actorsâ€™ Playhouse.

Carolina Rivero, an 8th-grader at St. Thomas the Apostle, delivered a spirited rendition of Adeleâ€™s â€œRolling in the Deepâ€ to win Individual Vocal Pop/Rock/Rap. Judges awarded top prize for Individual Vocal Theatre/Jazz/Classical to Amanda Gonzalez-Piloto, a freshman vocalist at the New World School of the Arts, who delighted the audience with her version of â€œTaylor the Latte Boy.â€

All category winners received master classes taught by local professionals and opportunities to attend a range of professional performances over the coming year; a pair of subscriptions to the Actorsâ€™ Playhouse 2014-15 Mainstage Season; local restaurant certificates; and professional headshots for their portfolios from Alberto Romeu Photography. The Individual Dance Winner also received a full scholarship to the Thomas Armour Youth Ballet.

Early in the evening, Actorsâ€™ Playhouse executive producing director Barbara Stein welcomed local dignitaries and graciously thanked the many event sponsors. At the end of the night, the stage was filled with beaming contestants, purple Finalist medallions swinging at their necks. Steinâ€™s welcome words still echoed in the confettied air.

â€œThis has been the most amazing competition, one that inspires the dreams of so many and that weâ€™re so glad to be a part of. Nobodyâ€™s leaving here tonight whoâ€™s not a first-class winner.â€