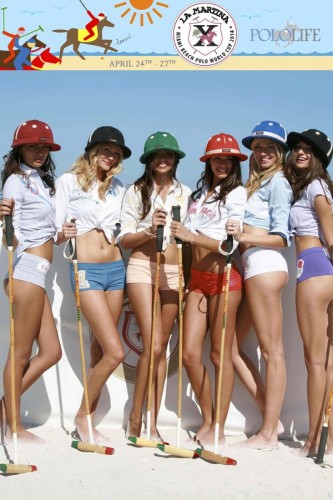 The Polo Life, LLC presents the tenth annual La Martina Miami Beach Polo World Cup, the worldâ€™s largest and most prestigious Beach Polo competition, taking place from April 24th to April 27th, 2014 between 20th and 22nd streets on the sands of South Beach, Florida, with the support of The Miami Beach Visitor and Convention Authority. This year marks the tournamentâ€™s coveted Ten Year Anniversary for the production of the sportâ€™s premium event by The Polo Life, based in South Florida. General Admission and VIP tickets are now on sale at www.miamipolo.com with a dedicated Miami Beach Polo World Cup Travel Package available at the newly opened Metropolitan by COMO, Miami Beach â€“ one of the tournamentâ€™s Official hotel partners.

The four-day, globally renowned weekend event, considered the most unique of its kind, features leading polo players from around the world competing in two tournaments for both men and women. The La Martina South Beach Womenâ€™s Polo Cup VI takes place on Thursday, April 24th, featuring eight womenâ€™s teams in a one-day series of round-robin championship matches. Last yearâ€™s winning team will not be back to defend their title as 2013 champions, leaving the door open for a number of top-rated challengers that include Maggie McNamara, Tara Lordi, Cristina Hosmer, Laura Willson and Tannis Marleyâ€™s entry from Kentucky that includes Cary Campbell and Posey Obrecht , among others. La Martina, Eden Roc,
FontaineBleau Aviation and E! Entertainment will all be Womenâ€™s Polo Cup team sponsors.

â€œThis yearâ€™s La Martina Miami Beach Polo World Cup is our most prestigious to-date,â€ says Bruce Orosz, president and co-founder of The Polo Life. â€œ2014 is the culmination of an entire decade of bringing the nationâ€™s first ever professional Beach Polo tournament to South Florida. Thanks to the City of Miami Beach and everyone involved, we have made Miami Beach Polo World Cup one of the most popular annual events on regionâ€™s social and sporting calendars. The competition has also become a highly sought after exhibition event by some of todayâ€™s top Polo players from around the world. We are also one step closer to announcing our international expansion of The Polo Life in to a far eastern territory, which we are very excited to reveal. We thank all of our patrons, sponsors and supporters with helping to make the last ten yearâ€™s such a success.â€

The traditional post-event awards ceremony will be held at the end of each tournament to commemorate both womenâ€™s and menâ€™s competition winners, during which sponsor representatives will present trophies to the menâ€™s and womenâ€™s World Cup finalists. Invited attendees at this yearâ€™s La Martina Miami Beach Polo World Cup will once again experience the annual series of nightly VIP events that form an essential part of the four-day festivities. The annual fashion show by La Martina in the VIP tent on Saturday afternoon will be one highlight of the weekend in-between the grueling match play, in addition to a Sunday Morning â€œBrunch on the Beachâ€ by celebrity chef, Michelle Bernstein, also in the VIP tent.

â€œWe are delighted to announce our continued support of this yearâ€™s Miami Beach Polo World Cup event as Title Sponsor and official supplier,â€ says Mr. Adrian Simonetti, President and CEO of La Martina America. â€œFor us, Polo is a passion, a lifestyle choice and an historic sport with a unique culture. We support every class and level of Polo around the world whether it be on grass, snow or sand and have made a strong commitment for producing the very best technical equipment and performance-driven gears for Polo players. This desire for excellence is what we call â€˜La Martinaâ€™s Commitment,â€™ and we are proud to continue our long-standing association with the Miami Beach Polo World Cup during its acclaimed ten year anniversary celebration and as the eventâ€™s founding partner.â€

Lou La Vie will present Auto Art Miami, a curated installation of the worldâ€™s most significant automobiles, on Sunday, April 27th, between 11:00am and 5:00pm. Around 50 automobiles valued at over $100 million will be installed throughout Collins Park for art lovers, enthusiasts and design aficionados to enjoy before, during and after the tournamentâ€™s match play. Auto Art Miami Invites connoisseurs and collectors to display their privately owned automobiles from around the world in an â€˜art meets designâ€™ installation. The installation honors designers such as Ken Okuyama (Ferrari Enzo) Nuccio Bertone (Lamborghini Miura) and the Pininfarina family. Their automotive designs revolutionized the automobile and most importantly, art and design culture. Auto Art Miami will be one of the most significant art and design installations of its kind.

As part of the daily on-site consumer experience, attendees will also be able to browse and purchase dozens of luxury brands within the eventâ€™s retail village, including the latest from La Martina, Dragonfly Boatworks, Dressage Collection, Artesano, MissNYET and Buccellati. Complimentary food and beverages on-site in the VIP tent will be provided by 15 Steps, Fogo de Chao, Red The Steakhouse and Trapiche Wines, among others. Perfect Vodka is the eventâ€™s official vodka and will be serving cocktails in the VIP tent throughout the four days.

More than 10,000 people attend the Miami Beach Polo World Cup over four days each year and the tournament attracts professional polo players from as far as Russia, Switzerland and Malaysia, as well as the very best from South America.