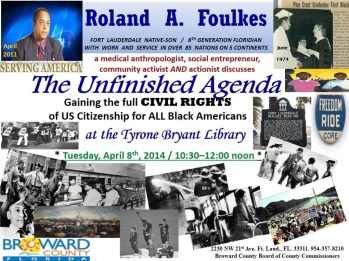 “The Unfinished Black Civil Rights Agenda -Gaining the full rights of US Citizenship for ALL Black Americans (Where Do We Go From Here and Post-Obama?)”.

In her 2013 article, â€œTrayvon Martin, Race, and Anthropology,â€ Dr. Leith Mullings (President, American Anthropological Association) spoke out, stepped up to, and challenged, conventional wisdom regarding â€œdiversity.â€ â€œDiversity,â€ wrote Mullings, â€œhas become a threadbare term usedâ€¦ to refer to almost any type of variationâ€¦[while] admirableâ€¦[diversity, expanded, fails] to address the historical injustices of racial exclusionâ€¦[and] obscures the systemic character of racism in the United States. All forms of discrimination are lamentable, but they are not equal, nor even necessarily comparable, [they]â€¦require different interventions.â€ By 2015, our nation will have commemorated several of those key, momentous, interventions targeting extant anti-Black/pro-White racist world-views, laws, systems, beliefs, attitudes, customs, and practices. To date, Civil Rights laws throughout south Florida, and across our nation, have failed (i) to end White privilege, (ii) to abolish, what the Rev. Dr. Martin Luther King, Jr. called, the â€œDisease of Racism,â€ and (iii) to close the resulting disparities lived by diverse Black men, women, and children through Euro-centric Educational, Medical, Military and Prison Industrial Complexes. Even with President Barak Obama in the White House! Accordingly, for Dr. Mary Francis Berry (Longtime Former Chairwoman, the United States Commission on Civil Rights), and despite the frenzy over diversity, â€œThe crux of the problem today is there is no [Black] civil rights movementâ€¦[because] President Obama is the prize in the minds of most peopleâ€¦at the end of the struggleâ€¦ [He] was our payoffâ€¦â€ She added, â€œThere will be a [re-vitalized] civil rights movement when Obama is no longer presidentâ€¦.andâ€¦the problems that Black people have are still here…”