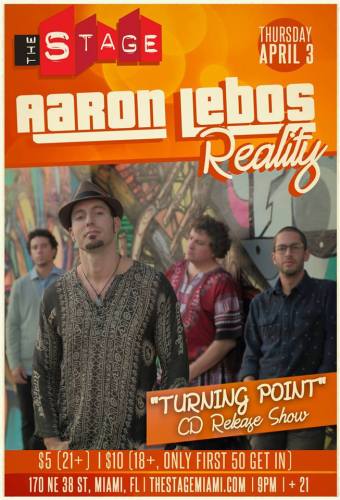 The Aaron Lebos Reality jazz / rock foursome has reemerged with an eight-song collection of new music called Turning Point, a renewed energy for live performance and a discernible new sound. The band will be commemorating the occasion on Thursday, April 3, 2014 at The Stage Miami and will also be presenting the video for the first single from the set called â€œScreens”.

â€œWe definitely found our sound with this new release,â€ says guitarist and composer Aaron Lebos. â€œThis band is really excited about the new direction the music has taken and feel that this recording is a very accurate portrait of the group today.â€ ALR has been together since 2012 and is already locally known for uniquely fusing jazz, funk, rock, R&B, Latin and world music. They released their self-titled debut that same year.

Lebos is a versatile guitarist born and raised in Miami. He received his Bachelors degree from the University of Miami and a Masters from Florida International University â€“ both in jazz performance. He developed much of his versatility playing gigs and recording in the diverse South Florida music scene and touring nationally. Lebos regularly performs with some of the biggest names in area including Nicole Henry, Tony Succar, the Spam Allstars and others.

Another standout track is called â€œFlux Capacitor,â€ a dance / indie rock / jazz hybrid. The collection will be available on CD and as a download on iTunes. ALR features Lebos on guitar, Eric England on bass, Jim Gasior on keyboards and Rodolfo Zuniga on drums. Learn more at www.AaronLebos.com.