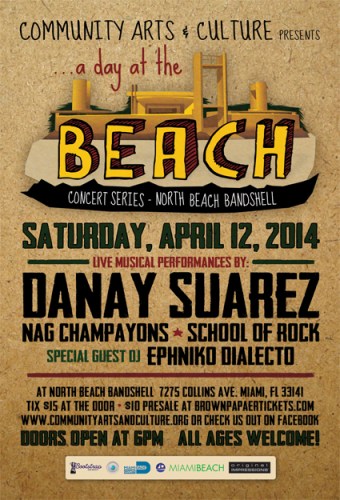 The popular North Beach Bandshell concert series hosted by the non-profit Community Arts and Culture organization plans its next outing Saturday, April 12, 2014, beginning at 6 p.m., and this time featuring the emerging Cuban singer / songwriter Danay SuÃ¡rez. Local â€œafro-galactic / psychedelicâ€ jam sextet the Nag Champayons will perform in support, as well as the Miami chapter of the School of Rock plus guest DJ Ephniko Dialecto.

SuÃ¡rez, originally from La Habana, Cuba, has been generating a buzz throughout Latin America and Europe with her soulful voice, razor-sharp lyrics and innovative musical style. Performing since the age of 15, Danay formed part of the Havana Cultura series, collaborating with various artists throughout the years. She has performed in European cities such as London, Paris, Amsterdam, Berlin and Istanbul, and in Latin America, Mexico, Panama and Colombia. In addition, the singer / songwriter released her first album Polvo de la Humedad in 2008, which was followed by her Havana Cultura EP in 2010.

The Nag Champayons are a largely improvisational collection of musicians drawing inspiration from African, Caribbean, hip-hop, rock and jazz influences. The band released a self-titled EP in 2012 that features the single â€œ183rd Street Flea Marketâ€ with guest vocalist Itagui from Locos Por Juana. The Nags hold a floating residence at the visually ethereal Hollywood, FL venue Mystic Water Kava Bar called Psychedelic Jazz Practice. The group is currently working on their next release which will feature the beat box and rap stylings of Komakozie and the Afro-Cuban inspired vocals of Tomas Diaz from the Spam Allstars.

Ephniko Dialecto is a bilingual songwriter, DJ and emcee originally from Columbia and now residing in Miami. His style has been compared to Mos Def, the Orishas and Damian Marley. A self-described â€œhip-hop educator/researcherâ€, he does workshops with youth programs at area festivals, juvenile detention centers and schools.

The School of Rock Miami is a youth program that teaches music and team-building in a band setting; they will be sending their house band to open the event.

The North Beach Bandshell is located at 7275 Collins Avenue, Miami Beach, 33141. A Day at the Beach Concert Seriesis sponsored in part by the State of Florida, Department of State, Division of Cultural Affairs and the Florida Council on Arts and Culture, Miami Beach Cultural Arts Council, the Miami-Dade County Department of Cultural Affairs, Bootstrap Tactics, Original Impressions, the Miami HEAT and Florida National University. Tickets are now available for $10 and can be purchased online here: http://bpt.me/594379. Sponsorship packages are still available and CAC is accepting tax-deductible donations for the day-of-event fundraising raffle.