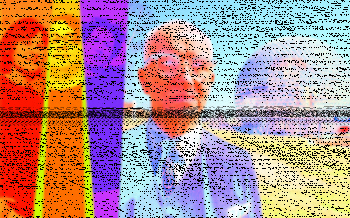 Miami Dade Collegeâ€™s (MDC) MDC Live Arts presents Academy Awardâ€“nominated filmmaker Sam Green with venerated indie rock band Yo La Tengo for an enthralling hour-long â€œlive documentaryâ€ on R. Buckminster Fuller, the inventor, architect, futurist, engineer, and author most famously known for his creation of the geodesic dome. As a progenitor of such issues as sustainability and conservation, Fuller was also a proponent of radical societal change through design and architecture.

â€œFuller was ahead of his time, the values that his work and life encompassed are directly aligned with the global environmental movement of today,â€ said MDC Live Arts Executive Director Kathryn Garcia. â€œWhether or not people are familiar with him and his design legacy they will be fortunate to experience his lifeâ€™s work through this captivating and creative reflection by Green and Yo La Tengo.â€

A unique collaboration between two independent pioneers of film and music, The Love Song of R. Buckminster Fuller premiered May 1, 2012, at the San Francisco Museum of Modern Art as a part of the 2012 San Francisco International Film Festival. The piece has screened exclusively at select art venues, including the Time-Based Art Festival in Portland, OR, the Wexner Center for the Arts in Columbus, OH, and the Institute of Contemporary Art in Boston, MA.