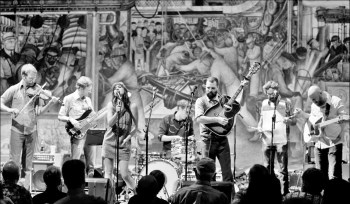 Miami’s own gem, Los Bastardos, kick off the night!.

“The Defibulators (not defibrillators) hail from Brooklyn, New Yorkâ€™s thriving indie scene and theyâ€™ve developed a funky, rootsy, out-of-control sound thatâ€™s all their own. The six-man, one-woman band blends bluegrass, country, honky tonk, rockabilly, Dixieland jazz, punk, and maybe a touch of anti-folk into an intoxicating, good-time mÃ©lange thatâ€™s guaranteed to slap a smile on your face. Roots-heavy, post-punk music that reinvents the conventions of country music with a CBGB-meets-Grand Ole Opry feel.”