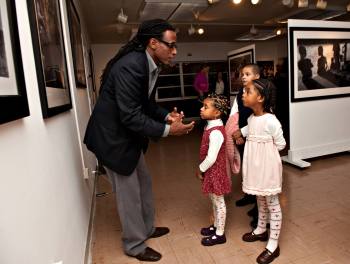 Carl Juste, ACND alumnus ’81, will present a retrospective of his work documenting the course of his 25 year career as photojournalist for the Miami Herald and past exhibits at ACND including: “Cachao” 2007; “Havana & Haiti” 2008; and “Invictus: Haiti Unconquered.â€

Under threat of persecution, Haitian-born Carl Phillipe Juste (ACND alumnus 1981), fled with his family from Haiti in 1965. Settling in Miamiâ€™s Haitian community, Juste flourished academically and won a scholarship to the University of Miami. Although he intended to be an engineer, he could not ignore the photographic inner voice that had spoken to him since childhood. Responding to a clear relationship he shared with the visual world, Juste vigorously pursued photojournalism and since 1991, has served his community through his work at the Miami Herald. He has received numerous awards for his work from Picture of the Year, Pulitzer Prize, Society for News Design, Best of Photojournalism, and the Robert F. Kennedy Journalism Award. Juste is founder of both the IPC Visual Lab and Iris Photo Collective.

Juste has exhibited his own work and of his students from IPC Visual Lab many times at the ACND Gallery, and has exhibited at both solo and group shows at the Bernice Steinbaum Gallery, Little Haiti Cultural Center, and other galleries throughout South Florida.