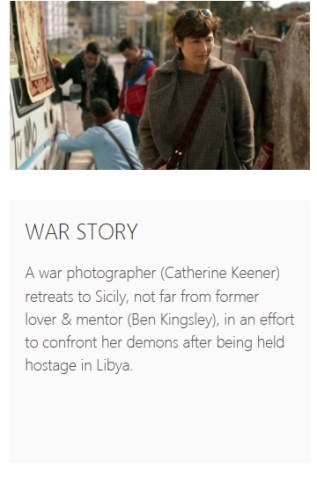 â€œWar Storyâ€ is the third film produced by an industry newcomer, Kreate Films, a local South Florida production company. Lee (Catherine Keener) is a war photographer who has spent her adult life in the worldâ€™s most treacherous conflict zones, documenting the catastrophes of others. When we meet her, she has recently experienced her own horror after being taken hostage and brutalized in Libya. Instead of returning to New York where her concerned colleagues and loved ones anxiously await her, Lee detours to Sicily instead, where she holes up in a small hotel to weather her PTSD on her own terms, not far from the home of her former lover and mentor Albert (Ben Kingsley). As Lee struggles to recover from her psychic and physical wounds, she crosses paths with Hafsia (Hafsia Herzi), a young Tunisian migrant in need of an abortion and safe passage to France, who bears a striking resemblance to a Libyan girl Lee photographed just before her capture. Desperate to connect, Lee tries to help Hafsia, and conquer her own formidable demons in the process.