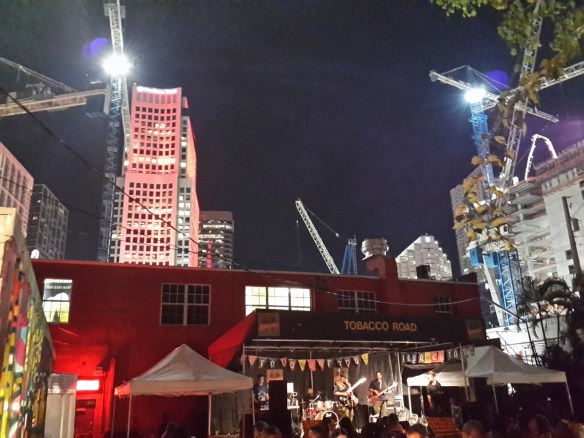 In this day and age where it is prohibitively expensive to experience some truly amazing non local music, it was so beautiful to see good oleÂ Tobacco RoadÂ offering up a melodic solution. The literal Miami institution which has been around for over 100 years hosted the 7th AnnualÂ Swamp StompÂ that brought together some of the best bands you have probably never heard. For $10,Â YES ONLY $10,Â one could partake in a superb two night music festival headlined by the uber talented reggae bandÂ JahfeÂ and the amazingly captivatingÂ The Bright Light Social HourÂ (TBLSH). There were also $50 VIP tickets to benefit the benevolent charityÂ Generation MiamiÂ that included admission, all you can eat BBQ including delicious Swamp (gator meat) Chilli and an open bar with a solid selection of liquor, not bottom wrung shitty well piss.

The show was held in the parking lot with a stage right under the matrix of ginormous cranes building Brickellâ€™s epic new City Center. It was a pretty remarkable to see this burgeoning project as the festival backdrop. The Friday night show was dedicated to reggae with performances by the incredibly talented, local artistsÂ Don Sha,Â Johnny Dreadand headlined by Jahfe. We missed Johnny, but Don Sha and Jahfe were both truly amazing. Check out their music if you want to discover some worthwhile new bands.

The Saturday night show had an American Roots and Rock nâ€™ Roll theme. We only made it to seeÂ Roosevelt Collierâ€™s Phunk PhactoryÂ and The Bright Light Social Hour but both profoundly rocked it. The Phunk Phactory were really badass, they are a South Florida bred instrumental band that play awesome phunky ass Jazz. They finished off their magnificent set with two classic covers, Sly and the Family Stoneâ€™s â€œThank Youâ€ and George Clintonâ€™s â€œWe Want the Funk.â€

We actually stumbled upon The Bright Light Social Hour last year by accident atÂ The StageÂ and fell IN LOVE. These guys are such a talented, under-the-radar group that fuses together psychedelic/rock/southern/jam into phenomenal dream-weaving music. Do yourself a huge favor and listen to their epic songÂ â€œDetroitâ€Â right now. (You know you want to click on it.) Their mesmerizing songs get under your skin and then when these guys start to jam and rip on their guitars, you just float away with them into musical Nirvana. They mixed a lot of their new songs into this set which were good but it is their old stuff that goose bumps are made of. They even played a rousing cover of Marvin Gayeâ€™s â€œLetâ€™s Get it Onâ€ in their encore.

We had so much fun at Swamp Stomp and were so fortunate to have gone to see amazing bands and discover new ones. Thank you, Tobacco Road. We hope you continue to have these terrific Stomps for your next century of existence.