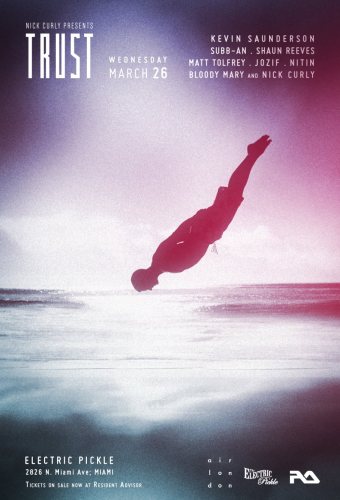 Nick Curlyâ€™s Trust has gotten off to a great start with a much talked about party at BPM Festival in Mexico. The label come party brand can now unveil full details of the next eventâ€¦ Trust Miami will take place during WMC on March 24th at Electric Pickle, the famed American club that hosts the best events of the conference.

Shaun Reeves is a key part of Visionquest. This collective of like-minded music lovers from Detroit have built their own musical empire since launching early 2011. With a label releasing the likes of Benoit & Sergio and Footprintz, plus their own melodic underground pop releases and all encompassing live musical extravaganzas at clubs and festivals all over the world, Shaun is a true scene pin-up.

Someone instrumental to the development of techno over the decades is Kevin Saunderson. A member of the Belleville Three, Saundersonâ€™s legacy is ever secured thanks to his membership of Inner City whose seminal hit â€˜Good Lifeâ€™ will never grow old. As well as on his own legendary techno label KMS, Saunderson releases on Planet E among many others and is as relevant now as ever, playing the worldâ€™s leading clubs on a regular basis.

Leftroom is the London label run by Matt Tolfrey. Trading in a fine brand of modern house and tech, the label hosts parties all over theworld and is often amongst the most charted on sites like RA. Tons more talent including Subb An, jozif, Bloody Mary and Nitin are on hadn to ensure this Trust event is not a leap of faith but instead a sure fire winner at this yearâ€™s WMC.