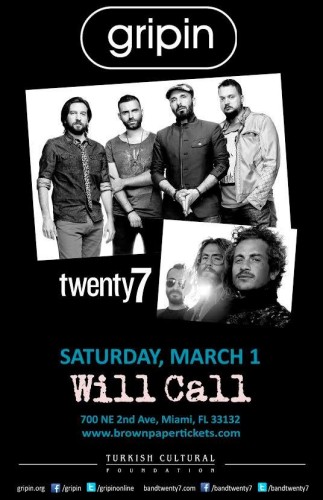 International alternative rock icons, Gripin, will play Florida for the first time when they perform at Will Call Miami on Saturday, March 1st. Joining Gripin as special guest is Twenty7, a Los Angeles-based alternative rock/world music band with Turkish roots.

The four-piece rock delegates from Istanbul have developed an impressive following in Europe, while slowly building momentum here in America. Gripin’s first tour of the States in 2012 consisted of only six dates, whereas their 2014 American tour more than doubles their previous effort to thirteen and possibly more (to be announced soon). This includes two stops in Florida, their debut in Miami on March 1st, followed by a stop in Orlando the following night; as well as a showcase performance at the popular SXSW music conference in Austin, TX on March 11th. “We are very excited to get back on the road and have Twenty7 join us again. Not only did it make sense to do it again, but bigger and better and more dates,” expresses Gripin drummer, Ilker Balic.

Although the group is lesser known in America, the devotion of their large fan base abroad is significant. YouTube views are as high as 17 million, almost a quarter of the population of their country of origin.